Flynn completed half-century in just 27 balls with a strike rate of 185.00.

Northern Knights skipper Daniel Flynn and BJ Watling‘s brilliant innings helped their side to reach a total of 170 runs against the Lahore Lions on Sunday. Lahore Lions bowlers bowled well within the powerplay overs. They also managed to dismiss both the openers Anton Devcich and the dangerous looking Kane Williamson.

Williamson single handedly demolished the Southern Express the other night. Asif Raza and Aizaz Cheema bowled a good line length and they did not allow the two openers to get away during the powerplay. The Knights could only manage 36 runs from the first six overs.

Skipper Daniel Flynn and Daniel Harris took on the Lions’ spinners after the field restriction overs. They were building a good partnership. It was then Mohammad Hafeez introduced himself into the attack but he conceded 12 runs in that over before he dismissed Daniel harris by taking a catch of his bowling. BJ Watling and Flynn continued to rotate the strike and kept the scoreboard ticking.

Flynn completed half-century in just 27 balls with a strike rate of 185.00. Watling continued the slaughter from the other end and brought up his fifty in just 33 balls as well. The Lions looked sloppy on the field right from the beginning. There were too many drop catches and too many runs were slipped through the fielders. As the Knights were gifted with so many chances they utilised the situation and put up a challenging total of runs.

Lahore Lions bowlers were all over the place after the powerplay overs. They could not get their basics right and thus gave away too many runs. The partnership between Flynn and Watling and the late flourish from the veteran Scott Styris, helped the Knights to go on top. Lions cannot be underestimated at the same tiome as they have enough fire power in their batting line up to chase this score down. It will be an exciting run chase to watch. 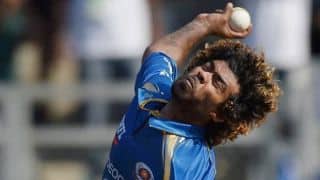 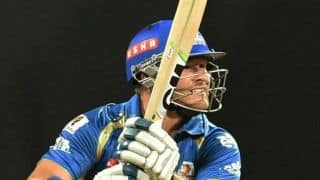