Danni Wyatt made news when she tweeted 'Kohli marry me' three years ago.

Danni Wyatt made news when she tweeted ‘Kohli marry me’ three years ago. According to reports in ESPNcricinfo she revealed that she would be using Virat Kohli‘s bat in the T20 tri-series between India, England and Australia.

Kohli had gifted her the bat during India’s tour to England in 2014. Earlier that year Kohli had smashed 72 in WT20I against South Africa. This was when Danni had tweeted. She talks about how the tweet gained her fame and followers.

“Ten minutes later,” she recalls, “I picked my phone up and I’ve got 1000s of favourites and retweets, it’s all over Indian news, they’re emailing my dad at home.”

Danni became the first England Women to hit a century in T20s during the Womens Ashes in November last year. England were 30 for 3 chasing 178 when Danni stepped in and won it for the team. Her innings included 19 fours and a six. She describes Kohli’s bat as “a beast.”

“The bat I hit the century with broke not long ago,” she explains. “So now I’ll be using Virat’s.”

Australia and England women s tour of India for T20I tri-series is rescheduled to ensure broadcasting of all the matches. 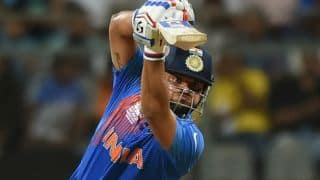