Australia coach Darren Lehmann has issued a report card and said that the current Australian side is too young as the team is rebuilding.

Following Australia‘s recent defeat to Bangladesh in the first of the two-Test series at the Shere Bangla National Stadium in Mirpur, Dhaka just a few days back, it is being said that it was Australia’s most serious and embarassing defeat in the recent past, as experts are calling for the reset button for the Australian side. Meanwhile, Australia coach Darren Lehmann has issued a report card and said that the current Australian side is too young as the team is rebuilding. He also added that the hosts did apply a good amount of pressure on the Australians, who failed to cope wiith it. FULL CRICKET SCORECARD: Bangladesh vs Australia 2017, 1st Test at Dhaka

“We are quite a young side. We had five under ten Test Matches. So, in terms of a rebuild as such, which we started after the Hobart/South Africa game, it is a young group coming together learning their craft. Bangladesh put the pressure on us and we didn’t cope well enough and that happens with a young group. The boys are all hurting with the criticism you get. [But] you deserve that when you don’t win. It is not good enough when you lose a Test match to anyone, but Bangladesh are tough at home,” said Lehmann, as reported by ESPNCricinfo. BAN vs AUS, 2nd Test: Visitors aim to avoid lowest ranking in 29 years

“If you look around the world not too many teams are winning away. We are very good at home and have struggled away. So, we have got to get a side together that can win at home and away, and that’s what we are trying to do. [Bangladesh] are very good. You are trying to look for that all-round player that can actually adapt in all conditions so you don’t have to keep chopping and changing with horses for courses. You want to pick a side, a group, that can play together for five to ten years if that is possible and that is what we are trying to do. So, for us, it is a long-term view,” he added. BAN vs AUS, 1st Test: Warner’s pristine Baggy Green draws attention

On being questioned if Usman Khawaja would be a good choice in the tour, he said, There was certainly a feeling of that. It is important to have a settled group. For the Ashes, we are pretty clear on where we are going and who want to play in that scenario.” Speaking on the Dhaka track, he said, “The way the wicket was, you are not going to have too many overs bowled by the quicks as the game goes on and we expect the same sort of pitch.” He was also asked whom he would pick among Matthew Wade and Peter Handscomb for second Test at Chittagong, to which is promptly replied, “When we get there we will take a look at the wicket.” 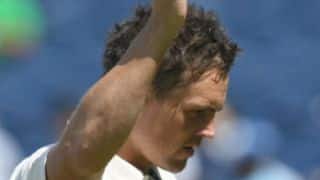