In a welcome change, Pakistani players and their captain, Misbah-ul-Haq and head coach, Dav Whatmore have been praised for their performances so far in the ongoing first test against South Africa at Abu Dhabi. 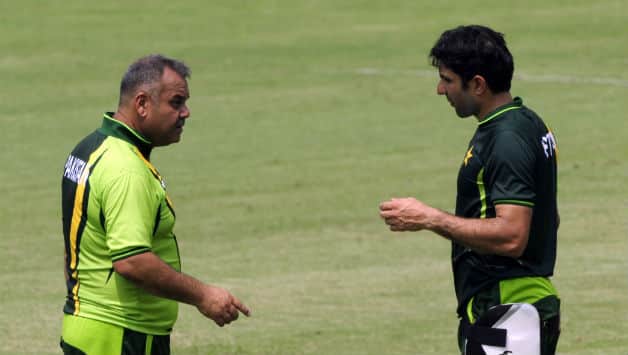 In a welcome change, Pakistan players and their captain, Misbah-ul-Haq and head coach, Dav Whatmore have been praised for their performances so far in the ongoing first test against South Africa at Abu Dhabi.

Young opener, Khurrum Manzoor and his partner, Shan Masood who made his debut in particular won accolades for their century partnership which has put Pakistan in a strong position in the Test.

Manzoor is still batting on 131 while Masood a tall left hander made 75 in his maiden Test innings to give Pakistan their first century opening stand in nearly one-and-a-half-years.

Former players and critics had blasted Misbah, Whatmore and the players after they lost a One-Day International (ODI) and a Test match in Zimbabwe last month. Pakistan had also suffered a whitewash in the Test series in South Africa earlier in the year.

The team and management had also come in for stinging criticism after the Champions Trophy disaster in England.

“It is really good to see the team doing well after the tour to Zimbabwe,” said former captain and noted commentator, Rameez Raja who had described Misbah’s captaincy as stale and called for a change in the team management.

“The good thing is that the batsmen have so far shown controlled aggression and there has been a sense of purpose in the way we have fielded, bowled and batted in this test,” he said.

Rameez said the Test was still far from over as the pitch was a very technical one and required lot of patience and application to bat on.

“Pakistan cricket has lacked in confidence in recent times even though we have one of the most balanced and varied bowling attacks in the world,” he added. .

Pakistan’s former Test opener and national team coach, Mohsin Khan, who was succeeded by Whatmore in a rare gesture also praised the Australian coach for his role in Pakistan’s commanding position in the test.

“You can see this team has played with a plan believe me the pitch was good for batting on the first day and to get out a team like South Africa for 249 is a big achievement,” he said.

He said that Pakistan had worked out plans for the top SA batsmen and they were lucky to be blessed with a pacer like Mohammad Irfan.

“Mark my words this guy is going to be a terror for batsmen. At his height and the pace and swing he is generating he will trouble all the batsmen. His spells on the first day were crucial for Pakistan’s dominating show so far in this test,” he said.

Mohsin also praised the two openers saying they had shown class by not being overawed by the big names in the SA pace attack and playing the good and bad balls on merit.

Pakistan’s former pacer, Shoaib Akhtar said that Pakistani bowlers had put their team into a strong position but the batsmen needed to capitalize on their good starts.

“South Africa is a very professional side and we must not waste the opportunity to take a big first innings lead over them. If we do that our spinners will trouble them a lot in the second innings.”