Chennai: Former England Cricket team captain David Gower today suggested reducing the test matches to four days, limiting the first innings to certain time and keep the pace of the game up to make test cricket more interesting. “Probably we need to do something to reinvent test cricket to make it more appealing,” said Gower, who delivered oration lecture on the occasion of Jolly Rovers Cricket Club, an affiliate of the TNCA, which celebrated its 50 years of existence today. “One of the things that you need first of all is to use Dhoni or Virat Kohli, who are playing the game presently for India to say to the country that Test cricket is important. If Dhoni says it is important, then the country will agreed to board,” he said. ALSO READ: David Gower laments overcrowded international cricket schedules

“The attraction is that you are getting the T-20 matches telecast from Australia and South Africa. If a 10-year-old who is watching says that that is what I want to do, then you need to set it higher. My generation of players say that Test cricket is important. Sunil Gavaskar was a brilliant player and he says it is important. But all these were 30 or 40 years ago,” he said. Gower explained in detail that there are possibilities to make test cricket more interesting. ALSO READ: Shane Warne: Time for 4-day Tests

“There are chances to bring people to watch test cricket when they might feel that they could do something else, you put in rules that suggest to reduce the test matches to four days instead of five, limiting the first innings to certain time, keep the pace of the game up,” he said. In an interaction with Aakash Chopra, Gower talked about finding parity to help encourage everybody to play test cricket by the respective countries.

Gower said, “There are politics in dropping players from the one day team. It is extraordinary act of hampering one’s ability to win games. The money element is involved in the game. For example, Lasith Malinga plays lot of one dayers than test cricket because of strain on the body. An enormous load of work is done by these people. Therefore, I suppose they equalise remuneration. There has been a lot of talks during the last two years about the heist. It is about re-bouncing the finance of cricket.”

“So, West Indies needs money and South Africa is in the danger of getting to be a poor country. Therefore the finances are to be rebounced. ICC is in a dangerous territory. It is a club in a cloud. It does not have influence enough to necessarily effect change.”

He said, “It is a financial reality. A player would always think as to how he could maximise his earnings. So, he plays 6 weeks in IPL, 4 weeks in Caribbean league and in Big Bash and then he is getting these. 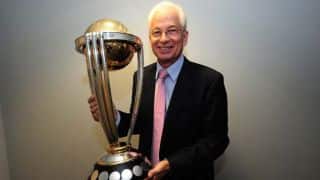