David Gower feels shortened tours of countries do not give teams enough time to acclimatise.

Asked whether there is a decline in the skills and abilities and the modern day cricket is not equipped to handle different conditions as South Africa lost when they toured India and India has not been performing well in Australia, Gower said, “part of that come from the crowded schedule, which is reflecting in their performances. No tour by any country is no more than one or two games as preparation but in the past it used to be three four games before you start a four months tour to a country. Every series now is basically making your fingers crossed. In the past we gained confidence to take pressure as we played four games. ALSO READ: Shane Warne: Time for 4-day Tests

“I think now there is little time to gain the confidence as they play one dayers followed by T-20 and then test matches. The main thing is that I am not quite sure whether I am in form or not,” he said.

He summed up saying, “I think the schedules are lot to answer. The fact that the sides go to a, b, c, very quickly means that you always do not have time to worry about result whether you win or lose because there is another series any moment now. Then you go to home conditions and win matches.”

On DRS to be implemented in the upcoming IPL tournament, he said, “I think DRS is a good thing because ICC suggests that there is improvement in correct decisions coming in now across international cricket as a whole. Crucial decisions make difference to a game. It is fascinating as to how good umpires are in general terms anyway. DRS is not 100 per cent but they are working on it.” ALSO READ: BCCI may implement controversial DRS during IPL 2016, says Rajeev Shukla

“Also, in the history of 138 years of cricket the umpires have never been wrong. If the umpire thinking the other way, he goes little far away to the third umpire sitting over 150 yards away before a computer and he says that the computer says you are wrong. So, you need umpires on the field.”

On the spot fixing issues and educating the younger generation of players, Gower said, “Let us be truthful. Even with the highest standards of behaviour around the world, every society has crime. We all think we know the rights and wrongs and we bring up children to understand right and wrong. But, temptations most often come from circumstances which are unique.

“Every case is potentially different. From school team to international team, someone needs to tell you what not to do. In UK County, players are given a talk every year on this aspect telling them to report back if anyone comes to you or anything suspicious. Therefore, the penalties have got to be severe on those who are caught.”

He referred to similar problems in tennis which was exposed before the Australian Open and said, “there are great personalities in tennis like (Novak) Djokovic and Roger Federer, who have set highest standards of performances and great spokesmen of tennis. To me if Roger is ever accused of doing something illicit the world will step on facts.” 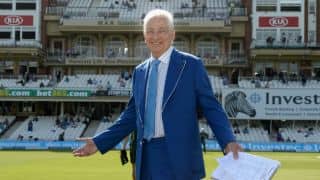