He also said that the current side has "match winners".

“It’s a lot more balanced team,” 24-year-old Miller said when asked what he feels is clicking for the team this season.

He also said that the current side has “match winners” as well as good back-up players.

Heaping praise on Glenn Maxwell, who scored brilliant knocks of 95, 89, 95, the last one against Sunrisers Hyderabad, Miller said the Australian is in great touch and capable of tearing apart even the good bowling attacks.

Punjab on Tuesday notched up a crushing 72-run win over Sunrisers Hyderabad, with Maxwell producing yet another blistering knock from 43 balls.

He said that Virender Sehwag has also contributed at the top order while Laxmipathy Balaji has impressed with his bowling.

“The team wants to keep winning and carry on the momentum,” Miller told PTI over phone.

The Punjab outfit, who have only once qualified for the knockout stage in the six editions of the event, this season also have the likes of Cheteshwar Pujara, Mitchell Johnson and captain George Bailey, spinner Murali Kartik in the side.

While the team’s batting has been exceptionally good, Miller felt that the team has scope of improvement in the fielding department.

Asked what was the difference he felt in the weather in Abu Dhabi and playing in India in summers, Miller said, “the weather in Dhabi is hot and dry, but the evenings are not too bad.” 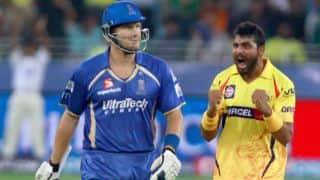