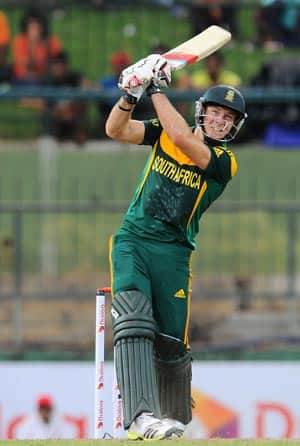 Miller helped South Africa score 38 off the last two overs to give them a chance at defending the total that looks fighting. In the penultimate over of the innings Miller flicked the first ball from Thisara Perera to the boundary. He then hit the ball to his favourite ‘V’ area for a massive six. The third ball of the over was hammered over deep mid-wicket for a six. Nineteen were scored of that over.

Miller began the final over with a ferocious pull over mid-wicket off Lasith Malinga for a four. He then followed it up with a six over long-off off a misfired yorker. The fifth ball of the over was hit hard towards long-on which was Miller’s fifth six of the innings.

Miller walked in when South Africa were precariously placed at 100 for five in the 30th over of the innings. He changed the momentum of the innings with a lofted shot off left-arm spinner Rangana Herath off his fifth ball of the innings for a boundary over mid-off. That released the stranglehold put on by Herath and Ajantha Mendis — the spinning duos — a little. Miller’s partnership of 48 runs with captain AB de Villiers for the sixth wicket was the only bright spot of the innings. It was a time when South Africa looked like registering a fighting total.

Mendis picked up de Villiers (47 off 72 balls) just at the right time which allowed their bowlers to exert pressure on the lower middle-order. Robin Peterson was bamboozled by Mendis two overs later [42nd of the innings] with an off-break which caught the South African all-rounder plumb in front.

South Africa’s batting performance was the talking point after they failed to click as a unit in the first couple of One-Day Internationals (ODIs). The absence of Hashim Amla was a body blow for the Proteas as the onus of taking the batting responsibility fell on the senior members who have not played much in the island nation.
Sri Lankan bowling was on the mark on a track that looked tough to bat on. The opening bowlers — Malinga and Angelo Mathews didn’t allow free scoring opportunities by bowling incessant line around the off-stump. South Africa fielded the third opening stand in as many matches. This time it was Alviro Peterson and Quinton de Kock.

Peterson was cautious and showed the intent of staying on the wicket. He helped himself to a boundary of a loose delivery from Mathews early on in the innings for a boundary. His opening partner de Kock was a tad loose outside his off-stump and his footwork was non-existential. In the fourth over Tillekaratne Dilshan dropped de Kock when he was batting on five off Mathews.

In the next Malinga hoodwinked Peterson with a bouncer which came slower than the South African opener expected. Peterson made only eight. After his opening partner’s dismissal, de Kock took a lot of time to score runs. He looked ever-so-vulnerable around his off-stump.

In the 14th over, de Kock was caught in two minds off a Thisara Perera delivery. Initially de Kock tried to play the ball but withdrew the bat at the last moment but the ball took the edge of the bat and he was out caught behind by wicketkeeper Kumar Sangakkara.

JP duminy looked set for a big innings when he drove with élan, cut confidently and swept with consummate ease. But his innings was nipped in the bud when he tried to run the ball down to third-man and the ball took the inside-edge and the stumps were shattered.

At 53 for three South Africa needed a good partnership. Skipper de Villiers and Faf du Plessis then took the control of the innings. Perera was in good rhythm and he trapped de Villiers on the pads. The umpire declared de Villiers not out assuming the ball was too high to hit the stumps. Sri Lanka took the review but the third umpire upheld the onfield umpire’s call since the replays were not too conclusive to overturn the decision.

Sri Lankans bowled tight overs and South Africa were looking for consolidation. At 95 for three de Villiers lost the plot when he played a ball to the covers with soft hands and called du Plessis for a risky single. Dinesh Chandimal picked up the ball and swiftly returned it to the ‘keeper and du Plessis was an inch short of his crease.

Farhaan Behardien failed to pick Mendis’s conventional off-break and was bowled through the gate between his bat and pad for a four-ball two.  It was here Miller came in and counterattacked. He never let the pressure fall on the scoring rate. It remains to be seen if Miller’s heroics help South Africa save themselves from losing the 12th consecutive game against Sri Lanka in Sri Lanka.

India vs Zimbabwe 2013: 4th ODI postponed due to elections