Controversial Australian batsman David Warner had to be separated from South Africa A wicketkeeper Thami Tsolekile during his 33-run second innings on Saturday. 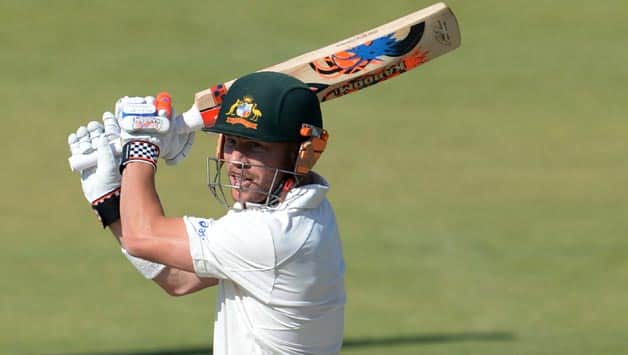 David Warner was told to join the Australia A tour of Africa to get match practice and runs. He scored 193 runs in the first innings against South Africa A © Getty Images

Controversial Australian batsman David Warner had to be separated from South Africa A wicketkeeper Thami Tsolekile during his 33-run second innings on Saturday.

Vaughn van Jaarsveld pulled Tsolekile away from Warner as the war of words boiled over on the final day of a four-day match staged in warm mid-winter conditions.

Warner failed to match his superb 193-run first innings, but hit six fours off 53 balls before being caught by Tsolekile off the bowling of Beuran Hendricks.

Left-handed batsman Warner was axed from the Ashes 2013 tour for punching England batsman Joe Root in a Birmingham bar after an ICC Champions Trophy 2013 game between the two countries.

He was told to join an Australia A tour of Zimbabwe and South Africa to “get match practice and runs in the longer format of the game”.

Warner did not start impressively, managing scores of only eight and 11 in an 80-run victory over a Zimbabwe XI in Harare.

But his 193 heightened speculation that he might be recalled by Australia, who trail England 2-0 in the Ashes, after a series of woeful batting performances.

The Pretoria match was drawn after Australia A made 474 for five declared and 254 for six while South Africa A compiled 614 for seven declared.