David Warner's chances of playing in Big Bash League this season are slim with his manager claiming he might opt to rest after a packed schedule.

David Warner‘s chances of playing in Big Bash League (BBL) this season are slim with his manager claiming he might opt to rest after a packed schedule. Warner returned to competitive cricket in March this year after serving a 12-month ball-tampering ban. Since then, he has played in ICC Cricket World Cup where he ended as Australia’s top run-getter and will be part of the Ashes squad.

Australia have a busy international schedule starting from October to March next year and Warner may opt to skip the T20 league to avoid burnout.

“The chances of him playing are slim due to the amount of cricket he might have played,” Warner’s manager James Erskine told Herald. “He might play a bit of club cricket to keep his eye in but by the time he finishes the Ashes he’ll be well dusted.”

Warner has drawn interests from several BBL teams, but his chances of playing are five percent unless there’s a highly lucrative offer.

“Fox Sports and several teams want him but if I was a betting man my gut feeling would be there is less than a five per cent chance to play in the Big Bash. My advice to him has been rest. He’s played IPL, World Cup, Ashes, then Tests here and the summer season. My advice to him is “don’t burn yourself out” and I think that’s the right advice. If someone comes up with an offer he can’t refuse we’ll look at it but we’ll just see,” Erskine said.

Australia’s Twenty20 Big Bash League unveiled a new-look finals series and a shorter season Thursday following fan feedback. The ninth year of the domestic competition, starting on December 17, will again see the eight franchises playing 56 regular season games, but they will be condensed into 42 days with more double-headers. Five teams will now be involved in the finals with a new system that gives a double-chance for the regular season’s top two teams.

The fourth and fifth-placed teams will play in the newly titled “The Eliminator” with the winner facing the third-placed team in “The Knock-Out”. 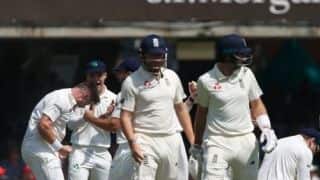