David Warner‘s scintillating form continued to scale great peaks and is closing in on the second hundred of the match to give Australia a gargantuan lead of 387 against South Africa, with nine wickets in hand.

The day started on a glum note with Graeme Smith’s announcing his retirement to shock the cricketing world. It couldn’t have come at worse time as his team is fighting to save the test match and a defeat is definitely not the way send one of the best leaders of all time walk into the sunset.

The day started with the Aussies going after the South African bowling, lead by Warner’s charge, just as it was during the final stages of the day’s play on day three. After taking on the role of the sheet anchor’s role for the better part of the innings, Chris Rogers got into the act and was replicating what Warner was doing at the other end. Runs were coming thick and fast for the Australians.

Warner’s batting was simply brutal; a straight six straight over Dale Steyn’s head showcased the form and verve the Australian opener has been since the start of the Ashes in December. With the scoring rate well above six per over and heading for huge lead, Steyn did provide the breakthrough for the Proteas through other means; a brilliant throw from the deep that AB de Villiers let go between his legs to catch the lethargic Rogers by off-guard for a run out.

South Africa stemmed the run flow since Alex Doolan entered the crease. It makes one wonder if Michael Clarke should have promoted Shane Watson to continue the onslaught. Doolan endured a hard time early on, even nicking one to the keeper which the umpire signaled not out. Since then, Australians have played sensible cricket with an emphasis on not losing wickets. With Warner nearing his century and going strong and the lead nearing 400, it will be an uphill battle for South Africa to save the Test, leave alone winning it. 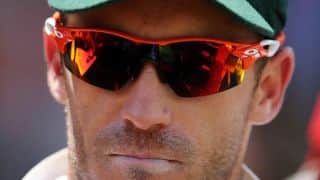