Australia's David Warner has been suspended until the start of the Ashes series and fined after attacking England's Joe Root in a bar, Cricket Australia (CA) said on Thursday. 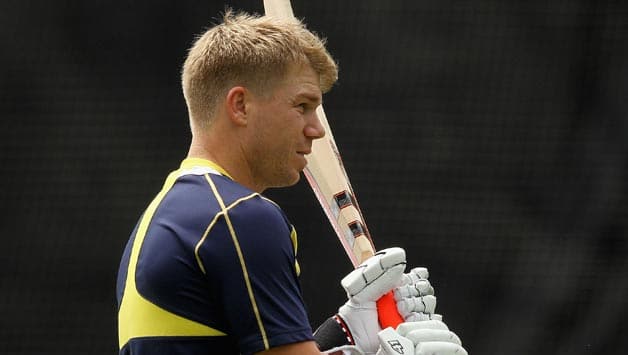 Australia‘s David Warner has been suspended until the start of The Ashes series and fined after attacking England‘s Joe Root in a bar, Cricket Australia (CA) said on Thursday.

Warner will now miss the rest of title-holders Australia’s involvement in the Champions Trophy, starting with their final group game against Sri Lanka at London’s The Oval on Monday, and their two warm-up matches ahead of the Ashes.

However, he will be available for the first Ashes Test against England at Trent Bridge, Nottingham, which starts on July 10.

The 26-year-old was dropped for Australia’s Champions Trophy match against New Zealand on Wednesday, although he did appear as the 12th man, after the incident at an Australian theme pub in the central English city of Birmingham at the weekend.

The hearing was the second in three weeks for the dynamic opener and has raised fresh concerns about the culture of the Australian cricket team going into the Ashes.

In March, four Australia players — Shane Watson, James Pattinson, Mitchell Johnson and Usman Khawaja — were dropped by coach Mickey Arthur for the third Test in India after failing to submit feedback requested by team management during the course of a series Australia lost 4-0.

“This is a line in the sand moment,” Arthur said at the time.

But the fact Warner’s ban does not encompass a Test, despite his seemingly more serious offence, is bound to raise questions about Australia’s disciplinary system, particularly as all-rounder Andrew Symonds was sent home from the World Twenty20 tournament in England in June 2009 after a late-night drinking episode.

CA said Warner had been reported for breaching its code of conduct relating to “unbecoming behaviour” after England complained of an “unprovoked physical attack” on batsman Root in the early hours of Sunday morning.

The latest spat involving Warner came barely three weeks after he was fined Aus$5,750 over an expletive-ridden Twitter tirade at two Australian journalists.

The incident with Root came after England’s comfortableg 48-run Champions Trophy victory over Australia at Edgbaston on Saturday.

“CA Senior Code of Behaviour Commissioner, The Hon. Justice Gordon Lewis AM, fined Warner $11,500 and suspended him from the remainder of Australia’s ICC Champions Trophy campaign as well as the Australian team’s two tour matches before the first Ashes Test against Somerset and Worcestershire.

“Warner will be eligible for selection for the first Test.”

It is understood Warner aimed a punch at 22-year-old Root, reported by British media to have been wearing a fancy dress wig, before players from both England and Australia left the pub.

The England and Wales Cricket Board later confirmed that Warner had apologised to Root, who accepted the apology.

Australia stand-in one-day captain George Bailey did his best to downplay the clash, when speaking to reporters after a no-result washout against New Zealand left the champions struggling to qualify for the semi-finals.

“It’s a very minor incident and it’s being dealt with in-house,” Bailey said.

“I really enjoy playing cricket with him (Warner)… I love the way he plays. I’m looking forward to hopefully playing a lot more with him in whatever career I have.”

Root suffered no physical injuries and was with England ahead of their day/night match Group A match against Sri Lanka at The Oval on Wednesday.

Warner struggled against England, scoring only nine runs in 21 balls, having made successive noughts in warm-up games against India and the West Indies.

In Tests, he has made three centuries and seven fifties in 19 appearances, averaging 39.46.