David Warner's Ashes 2019 has finally ended with the Australian opener getting out to England veteran Stuart Broad for the seventh time.

David Warner‘s miserable Ashes 2019 has finally ended with the Australian opener getting out to England veteran Stuart Broad for a record-equalling seventh time in the ongoing Test series on Sunday at The Oval.

After England were bowled out for 329 in their second innings of the ongoing fifth and final Test, the tourists were set a daunting task of chasing down 399 to win the five-match series. Broad, with the new ball, accounted for both the Aussie openers in successive overs.

He first had Marcus Harris (9) bowled off the final delivery of fifth over to hand England an early success. And then he did what he has done so often and with alarming regularity in the series – dismissing Warner.

For the seventh time on the tour, Warner fell to Broad after being caught in the slips in the seventh over having struck two fours in his score of 11.

Overall, this is the 13th occasion that Warner has become Broad’s victim in Test cricket.

This is the sixth time in the history if Test cricket that a batsman has been dismissed by the same bowler seven times in a single series. 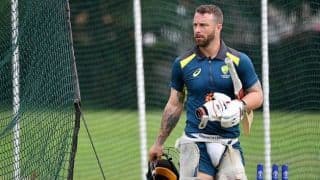 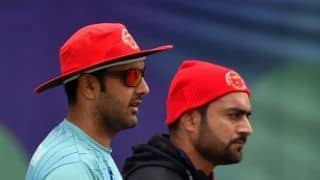 Tri-series 2019: Afghanistan opt to bat in third T20I vs Bangladesh