Just when all the Indian Premier League  (IPL) players had to leave their respective associations to join their franchises, Baroda teenager Deepak Hooda is making the most of the match practice he gets ahead of the most popular league in the country.

He has been allowed to stay back with the team for the first two matches of the 2013-14 Syed Mushtaq Ali Trophy T20 Super League that got under way on Tuesday. After playing on Tuesday and Wednesday at the MCA-BKC ground for Baroda, the India Under-19 all-rounder will join Rajasthan Royals the next day.

It has worked well for Hooda as Royals have been having their camp at the DY Patil Stadium, Navi Mumbai, which Hooda attended on Monday.

The right-arm off-break bowler and right-handed batsman who has played only T20 in the senior grade, having made his debut last season, top-scored for Baroda with an unbeaten 24 as his side chased a paltry Bengal total of 96 to win by seven wickets on Tuesday.

The best thing about Hooda is he doesn’t think far too ahead. “I don’t think much about the future. I think of the present. Whatever effort I put in my game, things will take its own course,” Hooda says.

He is one of Baroda’s agile fielders, unafraid to throw himself at the ball to pluck some fine catches as he did last week in the West Zone leg of Mushtaq Ali Trophy. On Tuesday, with the bat, he experimented some inside-out shots against Bengal‘s most-experienced off-spinner Sourashish Lahiri, picking him for fours with ease.

Selected by Rajasthan Royals for Rs 40 lakh in the February auction, Hooda is keen to make the most of his time in the IPL. “Whatever opportunity I get, I will give my 100 per cent. There will be a lot to learn from the seniors like Rahul (Dravid) sir and also from foreign cricketers. I am aware of handling things in Indian conditions but from international players, I will get to learn new things, how they do it in international matches, how they back themselves, how they switch on and off.”

Hooda, who made his debut at the senior level in 2012-13 Mushtaq Ali Trophy, is yet to play in List A or first-class. But he is confident of doing it at the senior level. “What I have been in U-19, I will continue to do the same,” he says about the transformation from junior grade.

“At the same time, I will have to put more effort in the senior level and stick to the basics. I back myself and my game. The way I play 50 overs (for India U-19), I play the same way in T20 and I guess it will be the same in the four-day matches also.”

He says he has learnt a lot as an under-19 player in terms of taking up the responsibility in the middle-order and handling pressure situations.

Baroda’s chief selector and former India wicket-keeper Nayan Mongia said “Hooda is one for the future”.

“His transformation from junior to senior depends on how he takes on the fast bowlers, how consistent he is and how he copes up with pressure in first class cricket. But he has a good temperament and has a good future,” Mongia said 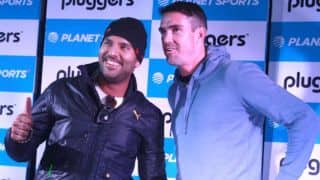