Shahzad had scored 80 against Oman in the semi-final earlier in the day. With his 52* in the final later in the evening, he became the only player to score 2 fifties in a single day in T20Is.

Afghanistan cricket team continued to take giant strides in international cricket, when on Friday, they beat Ireland by 10 wickets in the final of inaugural Desert T20 2017 tournament in Dubai. The 8-team tournament, which saw associate nations compete for the title in the matches being played in Abu Dhabi and Dubai, finally got its maiden winner in Afghanistan, who remained unbeaten throughout the competition and were aptly crowned as the champions. Mohammad Nabi (4 for 10) and Mohammad Shahzad (52*) were the chief contributors in the win. Shahzad became the first batsman to score fifties in two separate T20Is. Amir Hamza, Karim Janat and Fareed Ahmad too played their part by chipping in with 2 wickets each.

Both these teams played the semi-finals earlier in the day as Afghanistan beat Oman and Ireland triumphed over Scotland to set the title clash. Winning the toss, William Porterfield elected to bat first. His team had earlier posted 211 for 6 from the stipulated 20 overs in the semi-final. Perhaps buoyed by his team s batting, he opted to bat first and hoped for a similar performance from his team. But it was not to be, as his side lost four crucial wickets inside the powerplay overs. Stuart Poynter, the opener, was the first to go.

Poynter hit Fareed for two boundaries on the first two balls of the second over but was sent back to the pavilion on the third. His wicket started the slide, as Porterfield was the next to go for 9. The Irish batsmen failed to arrest the slide and were sent back one after the other. The Afghan spinners Nabi and Hamza not just tied the things down, but also kept striking, which completely derailed the Ireland batting.

Paul Stirling (17) and Greg Thompson (10*) were the only two batsmen to get into the double figures for Ireland. Nabi s four wickets and two wickets each by the trio of Hamza, Fareed and Janat folded Ireland innings for a paltry 71. Fans had high hopes from this game, as these two teams have shared quite an intense history on the cricket field and are also in line to get the Test status almost around the same time. Easily the two best associate teams, both Ireland and Afghanistan were the sides befitting for the final, but the match turned out to be a one-sided contest, thus upsetting the fans a bit.

Chasing a modest 72 to win, Afghanistan were always expected to come hard. With Shahzad at the top, it would not have come as a surprise had they won the game inside the powerplay overs. The team started just in the same fashion, piling up 64 without any loss in first 6 overs. Shahzad welcomed former England international Boyd Rankin by milking 16 runs off his first over. From here, things only went downhill for the Ireland side, as their bowlers kept giving away runs at a brisk pace.

Apart from Rankin, George Dockrell, Jacob Mulder and Craig Young too were ineffective and went for runs. Shahzad kept hitting them all over the park and finished the game in style, thus completing his fifty too. He also created a record in the process, as he had scored 80 against Oman in the semi-final earlier in the day. With his 52* in the final later in the evening, Shazad became the only player to score 2 fifties in a single day in T20Is. 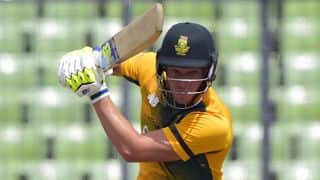