Mahendra Singh Dhoni smacked a hurricane century which powered India to 360 for 5 against New Zealand in a World Cup warm-up match being played at the MA Chidambaram Stadium in Chennai. 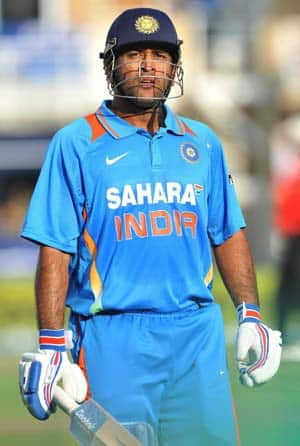 MS Dhoni scored a quick fire century to power India to score 360 for 5 in 50 overs.

Mahendra Singh Dhoni smacked a hurricane century which powered India to 360 for 5 against New Zealand in a World Cup warm-up match being played at the MA Chidambaram Stadium in Chennai.

Dhoni justified his decision to bat first, entertaining the boisterous Chennai crowd with some brutal hitting in the last ten overs, bringing up his century off just 61 balls, belting eleven boundaries and two sixes.

The Indian captain singled out Jacob Oram for special treatment, clobbering him for five consecutive boundaries in the 42nd over before taking three boundaries of the next over off Nathan McCullum to annhilate the New Zealand bowlers.

Dhoni was associated in a century partnership with Suresh Raina for the fifth wicket, which gave a huge push to the Indian score. Raina was also at his free-flowing best, punishing the New Zealand bowlers, hammering Oram for three sixes in the 44th over to bring up his half-century in 25 balls to cap off a bad day in office for the bowler who finished with figures of 9-1-70-2.

Dhoni was provided the near-perfect launchpad by the left and right handed pair of Gautam Gambhir and Virat Kohli who stabilised the Indian innings, raising a century stand for the third wicket after Sachin Tendulkar and Virender Sehwag fell in quick succession after a 35-run opening stand.

Gambhir struck 89 off 85 balls, studded with eleven fours while Kohli made 59 of 68 balls, punctuated with seven fours. Earlier, Tim Southee deceived Tendulkar with a slower one for 17 in the seventh over before Oram got rid of Sehwag with the first ball of his spell.

New Zealand captain Daniel Vettori who is suffering from a hamstring strain, is sitting out of this match.