Tottering at 99 for 4, Dhruv along with Himmat Singh added 104 runs to help Delhi end day one on a good note.

It was Dhruv Shorey, who led Delhi s resurgence in the final of the Ranji Trophy 2017-18 against Vidarbha. Tottering at 99 for 4, Dhruv along with Himmat Singh added 104 runs to help Delhi end the day on a good note.

Dhruv, who scored his first hundred this season, was quite elated. Speaking to the press, Dhruv said : “It’s a very, very big thing. In the Ranji Trophy final, getting your hundred… I was batting really well in the initial part of the Ranji Trophy but I wasn’t getting a hundred. But I’m happy that it paid off.”

Dhruv also spoke about his partnership with Himmat.

Talking about Day 2, he added: “Bat, bat, bat. It’s a very simple target. We have to bat as long as possible and score as much as we can.”

He elaborated about his batting on the first day as well. “It’s all about staying in there. It’s all about taking my time. In these wickets it is very important to take your time. Because if you don’t take your time and go for your shots, you’ll most probably get out. So, I took my time, gave respect to the bowlers,” he said. 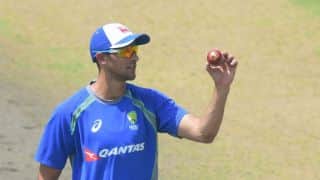