CoA chairman Vinod Rai has decided against his colleague Diana Edulji's call to scrap the selection process of the Indian women's team coach.

CoA chairman Vinod Rai has decided against his colleague Diana Edulji‘s call to scrap the selection process of the Indian women’s team coach and continue with Ramesh Powar at least till the New Zealand tour beginning next month.

In a letter to Rai, CoA member Edulji said Powar should be given an extension at least till the New Zealand tour, considering he has the backing of T20I captain Harmanpreet Kaur and seasoned opener Smriti Mandhana.

Rai, however, in his reply made it clear that scrapping the coach selection process is out of the question as the BCCI has already invited applications for the job.

The application deadline ends on December 14 and Manoj Prabhakar, Herschelle Gibbs and Dimitri Mascarenhas are among the applicants.

“Diana sent an email to Rai asking for extension of Powar as both Harmanpreet and Mandhana asked for it. She wanted the interview process to be scrapped,” a BCCI official privy to development told PTI on conditions of anonymity.

“However, Rai replied by saying that scrapping the process is not possible as the advertisement for the job has already been issued,” the official added.

The BCCI is expected to name the new coach before the New Zealand tour begins on January 24. The tour comprises three ODIs and as many T20 Internationals.

The women’s team is a divided lot at the moment with Harmanpreet and Mandhana seeking Powar’s extension while the seniormost player Mithali Raj is against such a move.

Powar’s term ended on November 30, a week after India lost the semifinals of the World T20 to England. The team management dropped Mithali for the knock-out fixture, triggering a huge controversy.

Mithali went on to accuse Powar and Edulji of trying to destroy her and being biased against her.

Powar, on his part, accused Mithali of threatening to retire midway into the World T20 after being denied the opening slot and creating chaos in the team. 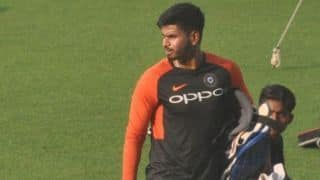