Just for the information, the entry was free at the stadium and one can expect such thing to happen when entrance is free at a ground.

The first day of the second Test between India and England at Visakhapatnam was a memorable one for skipper Virat Kohli as he scored another ton but what made headlines was a surprise visit by a streaker. That streaker was not a human but it was a local dog, who made grounds men running across the ground behind him. Be it cricketers on field at that time or spectators at the stands or viewers watching the game on their television, everyone laughed after the surprise visit by that dog. With that incident, the questions over security people were raised and later it came to know that it was none other than English cricketer Steven Finn, who let that dog enter the ground. FULL Cricket Scorecard: India vs England 2nd Test at Vizag

Well, just for the information, the entry was free at the stadium and one can expect such things to happen when entrance is free at a ground. Also, this is not the first time a dog interrupted a match. During the last season of Indian Premier League, a dog entered this same ground and interrupted the match. That interruption by dog led to early tea break on Day 2, probably the first such instance in a match where tea break was taken early because of a dog. On the same day, Finn posted a photo from his official Instagram account with that dog and wrote, “Visitor in the dressing room today at practice.”

Visitor in the dressing room today at practice

That entry by dog stir social media and many asked who let that dog enter the ground. Finn modestly accepted the fact that he did by replying to a twitterati.

Finn is the part of English squad in the ongoing Test series against India and is yet to play any match in this series. 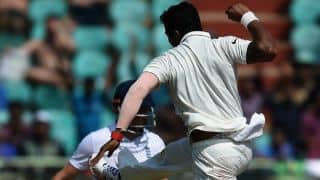 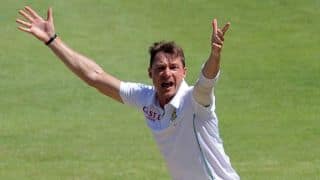