Dilruwan Perera smashed seven boundaries and a six to reach 54 not out.

Dilruwan Perera struck an unbeaten half-century to take Sri Lanka to 359 for eight at tea on the second day of the third and final Test match against Pakistan.

Perera smashed seven boundaries and a six to reach 54 not out off 187 balls as Sri Lanka look set to post a huge first innings total.

Sri Lanka lost two wickets in the second session of the day, with Angelo Mathews missing out on a century as he fell for 91. Rangana Herath was the second batsman who got fell off the first ball that he faced.

Earlier in the day, Sri Lankan skipper Angelo Mathews hit a dogged 67 not out to keep Pakistan at bay.

Debutant Dilruwan Perera was the other not out batsman with 29 as Sri Lanka crossed the 300-mark in the two-and-a-half hour session, extended due to Friday prayers. 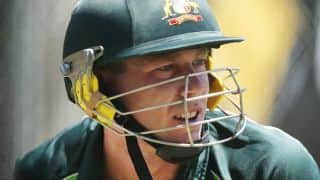 James Faulkner says, he believed in his big-hitting abilities