Dinesh Karthik has become the toast of the nation with his 8-ball 29 against Bangladesh in the tri-series final.

Dinesh Karthik has become the toast of the nation with his 8-ball-29 against Bangladesh in the tri-series final but he still feels like a “student in an University where Mahendra Singh Dhoni is a topper”, when comes to the tag of a best finisher. “When it comes to Dhoni, I am studying in an university where he is the topper. He is one of the guys I have always looked up to. It is unfair to compare me with him,” Karthik told the media during an interaction today.

Karthik made his international debut in the 2004 Champions Trophy three months before Dhoni’s debut. However, their careers took different courses over the next 14 years. How does Karthik feel about that? “His journey has been totally different and my journey is a different one. He is a terrific guy. He is somebody who used to be reserved, shy. Today, he is a person, who is really vocal in helping the youngsters. I feel these comparisons are very unfair. As I said, he is probably a topper in an university, where I am studying. I am just happy in the space I am in.”

What about suddenly becoming the apple of everyone’s eyes? “It feels good that all the attention is on me. All the good karma and good things I have done over the years helped me hit that six. It is just that the shot went for a six… probably the two mm extra that it went for it became a six … It is hard for me to put in words. I am just happy to play this sport. When you play domestic cricket, it is a hard grind, To suddenly get so much attention feels so good but you also know that you want this to be a start of something special.”

Karthik also mentioned the contributions of Abhishek Nayar in his life: “He has been the most important factor in the last two and half years in my career. He has helped me prepare for games. He has made me think in terms of strategy. He also knows what is the right way to work hard. He has been the river and I have been the boat.”

Karthik also backed Vijay Shankar despite his inability to get going against Mustafizur Rahman: “Vijay Shankar has the skill. He has done really well as a bowler. For someone, who is a batting all-rounder, he did well under pressure. I see a really good future for him. He has got a good attitude. He is a special talent and he has it in him to play for a long, long time.”

He might have been a bit upset with Rohit Sharma‘s decision to promote Shankar ahead of him, but heaped lavish praise on Rohit’s style of captaincy: “He has won three IPLs as skipper and has immense belief in his ability to lead a team. He does a lot of homework. He is strategically very strong. He is a very thorough captain and is someone who is highly skilled.”

What does he feel about leading Kolkata Knight Riders in the upcoming IPL, where he will be expected to fill the massive shoes of Gautam Gambhir? “IPL is extremely important. It is a fabulous tournament. Indian cricket is where it is because of the IPL. We get to rub shoulders with the best. On a personal note, it is very important tournament for me … I am very excited about the captaincy role. May be, it is time for me to embrace captaincy. The team has a very good bowling attack. I have to sit down with the coaches and see where I need to bat.” 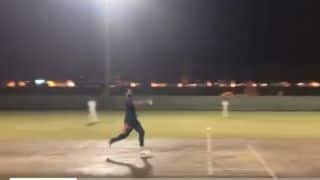