Dinesh Karthik shines, but West Indies restrict India to 190 for 6

Dinesh Karthik shines, but West Indies restrict India to 190 for 6

Playing a T20I after 7 years, Dinesh Karthik struck 48 from 29 balls. He shared a 86-run stand with Rishabh Pant for the third wicket.

At toss, Virat Kohli said, “There’s a reason West Indies are world champions.” India, who were ousted by West Indies in the 2016 World T20 semi-final, got another glimpse of the same. India were cruising. After Powerplay, it seemed 200 would be a formality. West Indies’ bowlers came back well to restrict India to 190 for 6 in the one-off T20I at Sabina Park in Kingston, Jamaica. A good last over that fetched India 16 runs lifted the total. In fact, there were no boundaries scored from 16 to 19 overs. A 12-ball 26-run stand for seventh wicket between Ravindra Jadeja and Ravichandran Ashwin came to India’s rescue.  FULL SCORECARD

The new Indian opening pair of Kohli and Shikhar Dhawan started the proceedings with back-to-back 13-run overs: Kohli and Dhawan struck 3 boundaries each in the first two overs. Some ordinary bowling from West Indies helped them. While Samuel Badree was on the shorter side, Jerome Taylor strayed down the leg-stump. Kohli greeted Kesrick Williams in the last over of Powerplay with an astonishing loft (or pull) over long-on for a six. He followed it with a four over point. He perished the next ball trying to clear mid-on but not before he made a 22-ball 39. FULL UPDATES FROM ONE-OFF T20I

Rishabh Pant was promoted to No.3 and, 2 balls later, a late call from him saw his Delhi senior Dhawan walk back to the pavilion, after a 12-ball 23. However, India had done well to plunder 66 from 6 overs.

For a change, Sunil Narine was bowling alongside Badree and not smacking him around the park like we saw him do in the IPL. The Trinidadian dished out a carom ball first up to Dinesh Karthik, who cut it past gully for a gorgeous boundary. That was the order of the day for the Tamil Nadu stalwart.

Karthik got a game at Yuvraj Singh’s expense. The southpaw’s injury opened the door of opportunity for the other. Playing a T20I after 7 years, Karthik struck 48 off 29. He shared a 86-run stand with Pant for the third wicket. At one end, Karthik made mockery of the West Indian attack at the other Pant struggled to get his timing right. After 15 overs, India had reached 140 with Pant on 24 from 28 balls and Karthik on 48 from as many balls. That was when Pant cut loose and slammed Samuels for a six and a four off consecutive balls. A single later, Karthik departed trying to slog Samuels and getting cleaned up in the process.

After Karthik fell, India added only 21 from the next 20 balls and lost 4 wickets before Jadeja and Ashwin broke loose in the final over. Williams claimed 2 wickets while Taylor was the pick of the bowlers returning with figures of 4-0-31-2. He dismissed MS Dhoni and Pant off back-to-back deliveries in the 17th over and that hampered India’s momentum big time.

Despite going for 22 from his 3 overs when Karthik was blazing guns, it was a surprise that Narine did not complete his quota of overs.

Earlier, Kohli lost the toss for the sixth time in a row. He called “head” 5 times in the ODI series and all the times it was tails. For a change he called “tails” and heads it was. Kohli, in fact, has not won a toss in T20Is yet.

Suvajit Mustafi consumes cricket for lunch, fiction for dinner and munches numerous other snacks throughout the day. Yes, a jack of several trades, all Suvajit dreamt of was being India’s World Cup winning skipper but ended up being a sports writer, author, screenwriter, director, copywriter, graphic designer, sports marketer, strategist, entrepreneur, philosopher and traveller. Donning so many hats, it’s cricket which gives him the ultimate high and where he finds solace. He can be followed at @RibsGully [Twitter] and rivu7 [Facebook].
First Published on July 9, 2017 10:47 PM IST
Last updated on July 9, 2017 11:08 PM IST
TOPICS:
Dinesh Karthik India India tour of West Indies 2017 West Indies
SERIES:
India vs West Indies 2017 Match : India vs West Indies 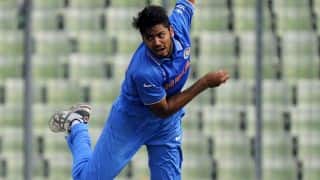 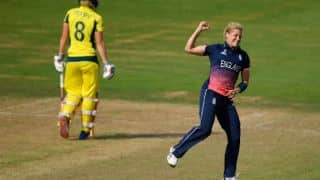