Nannes has played 17 T20Is in his career.

Australia seamer Dirk Nannes has joined Somerset for English county cricket’s domestic Twenty20 (T20) competition. The 37-year-old left-arm paceman, a former Dutch international, is now a Twenty20 ‘gun for hire’ and will bring plenty of experience in cricket’s shortest format to Somerset having played in both the Indian Premier League and Australia’s Big Bash tournaments.

Nannes, who played in 17 T20Is, is also familiar with English conditions after appearing for Middlesex, Nottinghamshire and Surrey in recent seasons.

“As an outsider, I’ve always been envious of the long and continued success that Somerset as a club seem to achieve,” Nannes said.

“It will be good to have the shoe on the other foot, and I will hopefully be able to contribute to a nice winning streak.

“I am now living very close to Taunton, so it feels like I’ll be playing for my local team.” 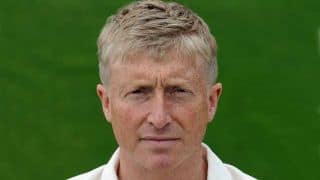 Misbah-ul-Haq is the only option to lead Pakistan in World Cup 2015: Asim Kamal