Young Australian paceman Mitchell Starc said he wouldn't be losing any sleep over Sachin Tendulkar's controversial dismissal on the second day of the third Test in Perth Saturday. 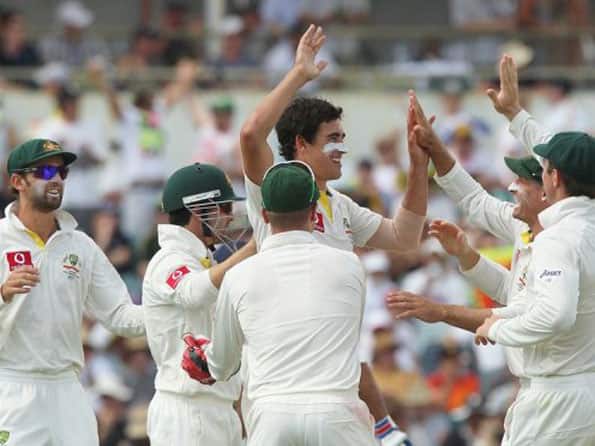 Young Australian paceman Mitchell Starc said he wouldn’t be losing any sleep over Sachin Tendulkar’s controversial dismissal on the second day of the third Test in Perth Saturday.

Tendulkar was trapped leg-before-wicket by the tall left-armer for eight in India’s second innings and showed his frustration as his bid for his 100th international century was again stymied.

The 38-year-old was clearly unhappy when Pakistani umpire Aleem Dar gave him out, believing the ball was heading down the leg-side.

Tendulkar could be seen watching the replay in the team dressing room just minutes after leaving the field, but he might not have liked what he saw, with television technology suggesting the ball was going on to hit leg-stump.

Starc, playing in just his third Test, said his only concern was what the umpire thought.

“I appealed for it, so I thought it was out,” he said.

“I haven’t seen ‘Hawkeye’ (computer simulation) or anything like that, but with no DRS (Decision Review System) the decision was out.

“He is not coming back.”

“It was an amazing feeling,” he said of the prized Tendulkar wicket.

“Any time you get a Test wicket it is special, but to get the ‘Little Master’ was a great feeling.

“More importantly they were four wickets down in their second innings and we will be looking to close it out tomorrow.”

Starc (2-14) said the Indian bowlers were guilty of pitching the ball too short on the opening day, and paid tribute to openers David Warner and Ed Cowan, who put on 214 to take the game away from the tourists.

“To be none for 200 on that wicket was pretty special,” he said.

Starc, who only found out he was playing on the opening morning of the Perth Test, admitted he expected to be dropped for spinner Nathan Lyon for the fourth match.

“I’d be very, very surprised if we played four quicks in Adelaide,” he said.

“Out of the four of us here I am probably the one to go for a spinner.” (AFP)