'Do we have to teach them what is Test cricket?' - BCB president fumes over poor show

'Do we have to teach them what is Test cricket?' - BCB president fumes over poor show

Bangladesh Cricket Board president Nazmul Hasan has severely criticised the performance of their team vs Afghanistan.

Bangladesh Cricket Board (BCB) president Nazmul Hasan has severely criticised the performance of their team in the ongoing Test against Afghanistan in which they have been thoroughly outplayed across the four days.

Such has been Afghanistan’s dominance, who are just two Tests old, that Bangladesh are fighting to save the match with four wickets remaining.

Nazmul picked out senior Bangladesh batsmen for their poor show, saying it never looked like they were playing a Test match. “There were plans but the planning was not appropriate. This is my personal opinion,” Nazmul was quoted as saying by Cricbuzz. “I have to sit with them because the coach and the captain are there. Akram is there, I have to ask what has happened. If I have to talk about performance, I have to give credit to the Afghans. Because they have batted like it is a Test match. One scored a century, and some others scored 80-90 runs. And among us – if Shakib (Al-Hasan), Mushfiqur (Rahim) or Riyad (Mahmudullah), if they can’t even score 50 runs then there is no possibility of a win. I never felt they were playing a Test match.”

He added, “Look at the first innings, the shot that Liton played, Mominul played a bad shot after 50. He is a Test specialist. Now, do we have to teach them what is Test cricket? They definitely had some mental issues. If they can score 370, we have to score 500 with the team that we have. This is a flat batting wicket. I don’t see any reason not to perform.”

Expecting a spin-friendly track at Zahur Ahmed Chowdhury Stadium, captain Shakib led an all-spin attack but were outperformed by their counterparts. A century from Rahmat Shah and fifties from Asghar Afghan and captain Rashid Khan helped Afghanistan to 342 in their first innings. The hosts were then bowled out for 205 before Afghanistan set them a daunting 398 to win. However, they have been reduced to 143/6 with rain interrupting the play on fifth and final day today.

Nazmul has also raised questions on the tactics. “It is tough to say what the problem is without having any conversation with them. Where are the pacers? We played in a sporting wicket against them. Why a sudden change? Who made this planning, I need to know. If I talk with them now than it will affect the game. So I am waiting. They definitely had a plan but there were errors,” he said. 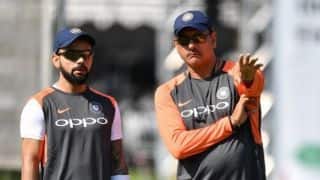