The South African and Australian T20 outfits will clash at the tournament's fourth match.

South African representatives Dolphins will clash with Australia‘s Perth Scorchers in the fourth match of the Champions League T20 (CLT20) at Mohali. The tournament has got off to an engaging start after the qualifiers had some interesting games, and a few one-sided ones as well. However now that the less challenging sides have been eliminated, the contest is much likelier to get more even.

The Dolphins are a well-settled side led by the experienced Morne van Wyk. The side includes some big domestic names like Vaughn van Jaarsveld, Jonathan Vandiar, and Kyle Abbott. On the other hand, Perth have no dearth of talent either with the likes of Adam Voges, Mitchell Marsh, Nathan Coulter-Nile, Craig Simmons, Jason Behrendorff, Yasir Arafat, and the indomitable ‘youngster’ Brad Hogg.

In terms of strength, both teams are almost at par. However, it is in terms of experience in Indian conditions that Perth holds the distinct advantage. A lot of their players have played in Indian conditions in the past and have also done well. As a team, Perth Scorchers have appeared in CLT20 three times in a row now, while this will be the first opportunity for Dolphins.
The match will be played at Mohali, which will suit the pace bowlers on either side. In the previous match played between Kings XI Punjab (KXIP) and Hobart Hurricanes, no batsman scored more than 43. However, that could be more due to a lack of application by the batsmen than any real demons in the pitch. Historically, Mohali has been a high-scoring ground in T20s.

On the whole, it should be a good contest, with a lot of runs for the batsmen but enough to keep the bowlers interested as well. Perth go in with the advantage, but Dolphins are more than capable of holding their own as well. 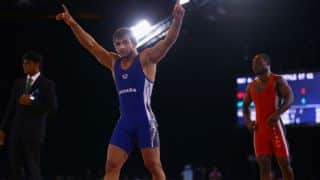 Arjuna award would have motivated me even more for Asian Games 2014, says wrestler Amit Kumar