Pakistan captain Shahid Afridi warned World Cup rivals not to underestimate his team, saying the players had turned a new leaf after the match-fixing scandal. 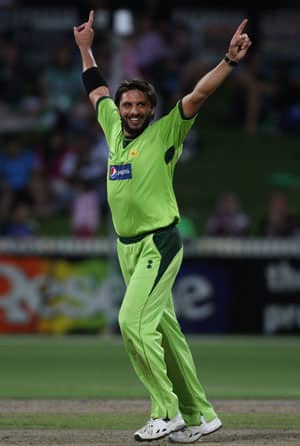 Pakistan captain Shahid Afridi warned World Cup rivals not to underestimate his team, saying the players had turned a new leaf after the match-fixing scandal.

Afridi admitted Pakistan had been blown away by the scandal, which saw former captain Salman Butt and two leading pacemen, Mohammad Asif and Mohammad Aamer, punished for their alleged involvement.

All three were banned for a minimum of five years by the International Cricket Council, which ruled them out of the World Cup, and also face criminal proceedings in England.

“I think we’re really going through a very tough situation,” Afridi told reporters in the Bangladeshi capital on Saturday, ahead of the marquee tournament opening on February 19. “But I am very happy because we are trying to rebuild the team and keep the morale high. I am confident the team is in very good shape now.

“We all know how important the World Cup is for us and for our country. The message for other teams is that no one should underestimate us.”

Afridi’s team will play practice matches against Bangladesh and England in Dhaka over the next few days, before their first Cup match against Kenya in the Sri Lankan town of Hambantota on February 23.

The Pakistan captain said his team was “focussed and united” under his leadership. “They feel hungry to win a big event and want to play good cricket,” he said, adding recent wins in New Zealand had bolstered the team’s morale.

“We have a very good bunch of youngsters and some experienced players,” said Afridi. “It is good to see Kamran Akmal back in the team. Misbah-ul Haq is in good form and Younis Khan is also batting well. I am also very happy with our bowling. We have two genuine spinners and some good fast bowlers, especially Shoaib Akhtar.”

Afridi said fans would see a vastly improved Pakistan in the World Cup. “Inshallah (God willing), we will achieve our goal,” he said. Afridi paid tribute to manager Intikhab Alam and coach Waqar Yunus for keeping the team in good spirits amid the controversy.

“They are really doing a very good job,” he said. “They have assured the atmosphere in the dressing room is healthy. We are trying to keep the boys together as a unit.”

Pakistan was initially due to co-host the tournament with India, Sri Lanka and Bangladesh, but were stripped of hosting rights after gunmen attacked the Sri Lankan team in March, 2009.

Afridi said he hoped international cricket would return to his country soon. “We are desperate to host the best teams. I am sure that will happen in the near future.”

Pakistan, World Cup winners in 1992, have been drawn with reigning champions Australia, Sri Lanka, New Zealand, Kenya, Zimbabwe and Canada in group A of the preliminary league. Four teams from the group will advance to the quarter-finals.

Afridi said he wanted Pakistan to meet India in the April 2 final at the Wankhede stadium in Mumbai. “That would be the perfect final for the cricket-loving people in both countries,” he said.