He has been christened 'The Wall' for his steady batting but senior Indian batsman Rahul Dravid says he is indifferent to the tag that has stuck to him over the years. 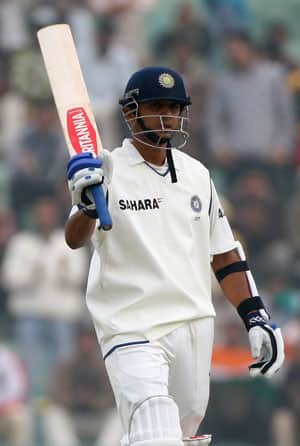 He has been christened ‘The Wall’ for his steady batting but senior Indian batsman Rahul Dravid says he is indifferent to the tag that has stuck to him over the years.

“I am indifferent to it. I never even think about it. I don’t think of myself as a wall,” the 38-year-old batsman, who has 15 years of international cricket under his belt, said.

A regular feature in the Indian Test team, Dravid said the competition for places in the side has increased manifold with talented youngsters stepping in.

“There is a good crop of young Indian batsmen coming through, players who have been doing well in one-day cricket but are yet to prove themselves in Tests. There is a good competition for places. We have got two or three senior players who probably won’t be around forever so it’s going to be an exciting time for a lot of kids trying to cement their places,” Dravid told Wisden Cricketer magazine’s latest edition.

Talking about the future of Test cricket, which according to some former players is battling for survival in the face of the Twenty20 storm, Dravid said the situation is not as catastrophic as it is made out to be. “It’s not as worrying as some people make it out to be. Twenty20 has come in and it has brought a challenge but I still feel that people want to play Test cricket but Twenty20 has become very successful,” he reasoned.

“So, the challenge is how do we schedule this format of the game so that it doesn’t affect the other forms of the game. That’s where the key is going to lie. Test cricket has survived a long time,” Dravid said.

The middle-order batsman, however, conceded that the spectator count has dwindled for Test cricket in India. There is an appetite but we have to be realistic now. You cannot expect full stadiums. There is 40,000-45,000 capacity stadiums in India. I don’t think, you are going to get those kind of crowds to watch Test cricket anymore. The reality is such that it is very difficult for people to be able to take time off from their offices, businesses and colleges to come and watch cricket,” he said.

But Dravid rejected fears that young players might be tempted to ignore Test cricket for the lure of easy money in Twenty20.

“There are more options today. Growing up in my times, there weren’t many options. You had to play Test cricket if you wanted to make decent living from the game. Today, there are more options for young people, I am not saying that they will choose only the Twenty20 option, but they have that option… I hope they make the right decision because you can play all three formats of the game and succeed,” he explained.

His impregnable defence has become legendary in international cricket but even Dravid has been nervous facing upto one bowler.

“(Muttiah) Muralitharan without doubt gave me most sleepless nights of my career. He had a combination of things, ability to spin the ball, variation, competitiveness, hunger… you could go on and on,” he revealed.

Asked to describe his 15 years in cricket, Dravid said, “I’m really proud that India is the number one Test team. I’ve seen Indian cricket since 1996 and to be part of this journey and to see India become the No. 1 Test team — not just for a short period of time because we’ve now been there for more than a year — it’s something I’m very proud of. I have seen a lot of changes in terms of the growth from a side that struggled to compete abroad to being expected to win abroad, to becoming a more professional team,” he said.

“To have seen Indian cricket become respected and the foremost power in the game during my time as a player is really nice,” he added.

On whether he was keen to play county cricket, Dravid said, “I am not really sure that I will have the time to do it. We will see next summer. If an option comes up then who knows, I might think about it. I have got a young family now and I don’t like spending time away from them for long periods.”