Dravid stresses on the need to regain momentum

Dravid stresses on the need to regain momentum 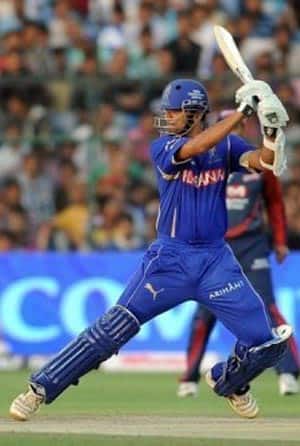 Rajasthan started on the right note, winning the first two games, but lost their way in their home and away defeats to Kolkata Knight Riders. They shared points with Royal Challengers Bangalore after yesterday’s match at the Chinnaswamy stadium was called off due to rain.

“We need to bounce back in the competition quickly. One-third of the games are almost over and we can’t afford to fall far behind,” Dravid told PTI.

“T20 game is about momentum. It will be nice to get back quickly,” said the 38-year-old veteran of 339 ODIs and 150 Tests on the eve of their sixth match, against Kings XI Punjab.

A key member of the team and enjoying a good run in the league, Dravid missed the last match at Kolkata due to a niggle, but would be playing tomorrow.

While some of the players including Shaun Tait, Botha, Ross Taylor, Jacob Oram and Stuart Binny headed for a practice session on arrival, skipper Shane Warne and Shane Watson stayed back.

The reverses against KKR still fresh in mind, Dravid is all the more disappointed after being left with no option but to share points with RCB. “There is not much you can do about it. It was disappointing. It would have been nice to have a game since we lost the earlier two. We needed a chance to play for the two points. We have still got nine games left in the tournament and we got to try and win as many as we can.

“Especially, if you win this away game, then when you go to Jaipur on Sunday we should be able to pull off a win there as well,” he said.

Asked about the Punjab outfit he said: “They are playing well. They are coming in with momentum and have won their two games. They have got good players in the side, they have got some good domestic talent and obviously good international players.”

“They have played well, chasing down 180 (188) plus against Chennai team and did well against Deccan Chargers as well. We respect them, but we feel we have also got a good team and some quality players who can deliver the results,” he added. Dravid also had words of praise for Punjab opener Paul Valthaty, the biggest find of the ongoing league.

“I saw his innings when he scored a 100 against Chennai. I thought he played well, full credit to him. He was with us earlier. It is nice to see for his sake to see him in good form, get runs and be among the wickets but, hopefully, not against us,” he said.

Asked if the team has any strategy in place for Valthaty, Dravid said they have a general strategy for the team as a whole. “Not specifically. We have strategies against all players, we don’t specifically focus on Paul or (KXIP Adam) Gilchrist. You got to have a general strategy and try and keep it simple and not complicate things. We don’t have long meetings and we don’t discuss too much about strategies and tactics. We just try to keep it simple and play smart cricket on the field,” he said.

The team has been on the move, having played three games in different venues across the country and now getting ready for the fourth in a week’s time but, according to Dravid, hectic schedule was part of the IPL challenge, and if the team gets positive results, fatigue won’t matter.

“The track is great and the outfield is very good. We hope that we have a good contest tomorrow and cricket is the winner.”