The controversial system has often divided opinions with current Australia Test captain Tim Paine expressing his frustration at the technology following the conclusion of the first Test against India in recently.

Taufel, who officiated in 74 Tests, 174 ODIs and 34 T20Is between 1999 and 2012, said DRS has changed umpiring. I don t think DRS has necessarily made umpiring easier or more difficult, he told Wisden.com. It s just made it different. Pre-DRS, you d deal with the error later. With DRS, you ve got to deal with it at the time.

Taufel, who was named the ICC umpire of the year five times in a row, said it can at times be a little embarrassing for an on-field umpire when his decision is dissected in full public view and even more when he/she has to reverse it.

You hear your decision dissected in your ear piece, in front of millions of people, and then, after 90 seconds, two minutes, you have to publicly change your decision and somehow re-gather your thoughts. You can feel a bit embarrassed and humiliated. It s really tough to move on and focus on that next delivery, he said.

The biggest controversy to have hit cricket in 2018 was the Cape Town ball-tampering scandal that resulted in three Australian cricketers being suspended from international cricket.

Footage showing Cameron Bancroft using sandpaper to alter the condition of the ball and subsequently hiding it inside his trouser left a shocking impact. Taufel touched upon the scandal saying Australian team should learn from the events and try making the game stronger than it has ever been before.

I hold the spirit of cricket close to my heart. Results come and go, but who we are and how we play really defines us. We are guardians of the game of cricket. We have to leave it in good shape for the next generation. The only way that we can do that is through adherence to the laws and to the spirit of that game.

The third umpire, quite easily, has got the toughest job out of the whole umpiring team, he adds. Their job is to watch the TV as their primary focus. There should be nothing that goes out to people in their lounge rooms that is missed by the third umpire.

When asked one thing that he would like to redo from his career, the Australian replied, If I did my career again, I would probably want to talk more about my mistakes, he says. To share my shortcomings more with my colleagues after a day s play, rather than keep them to myself and have to deal with them on your own in your hotel room. 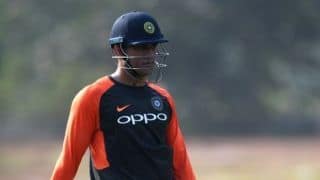