South Zone have turned the tide completely on their favour as they are having an excellent day two in the second semi-final of Duleep Trophy 2014-15 against East Zone. On day one they lost their way after Robin Uthappa’s ton and lost 81 for seven on the evening session. Vinay Kumar led team finished the day on 236 for nine. Laxmi Ratna Shukla was the main destroyer for the East Zone. He got four for 44 on first day.

On day two the last pair of South Zone, Abhimanyu Mithun, HS Sharath added 28 valuable runs for the team and took the team score past 250. When Varun Aaron clean bowled Mithun and finish their inning, the score was 264, which is not such bad score at the bowlers’ friendly Lahli wicket. In reply East zone are tottering at 69 for seven at Tea. All their big guns went back to pavilion. Rana Dutta and Aaron were at the crease.

East Zone started their innings very carefully. Two openers Nataraj Behera and Govinda Podder were cautious at the beginning. But suddenly East had a major blow, when Behera got injured and went back to the dressing room, retired hurt. Soon after Poddar, who is making his zonal debut lost his wicket. Sudip Chatterjee and Manoj Tiwary batted sensibly from there and took East to Lunch without any further damage. Two South bowlers Mithun and Vinay bowled in the right channel and hard gave the batsmen anything to score of. At Lunch on day two the score was 25 for one.

The destruction started after lunch when Stuart Binny took the ball. Immediately after Tea East Lost the wickets of Tiwary (Manoj), Chatterjee, Shukla and Wriddhiman Saha. Sourabh Tiwary tired to put up some fight but after few overs he also lost wicket. It was a brilliant display of seam bowling by the South Zone pacers, specially Binny, who took four wickets and East batsmen had no answer of it. 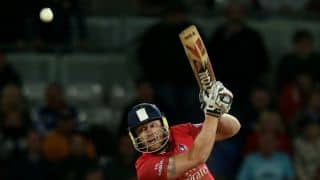 Andrew Flintoff to play for Brisbane Heat in BBL 2014/15