India Red bundled out India Green for 119 inside 40 overs on the final day of the match to win the final by an innings and 38 runs.

Akshay Wakhare, right-arm off-spinner, scalped a five-wicket haul on the final day of the match as India Red beat India Green by an innings and 38 runs in the final to lift the Duleep Trophy title at the M Chinnaswamy Stadium in Bengaluru on Saturday.

Siddhesh Lad scored 42 and Akshath Reddy scored 33 but none of the other batsmen failed to stay in the middle for long as India Red bundled out India Green for 119 inside 40 overs.

Wakhare and Avesh Khan did the most of the damage as the two shared eight wickets between themselves, with the spinner returning with the figures of 5/13 and the pacer scalping three wickets for 38 runs.

Earlier, India Red resumed play on the overnight scored of 345/6, with a 114-run lead over India Green, who were bowled out for 231 in the first innings.

India Red added 43 runs more on their total before they were all out for 388, securing a 157-run lead. Abhimanyu Easwaran, who scored a fine 153 and won the man-of-the-match award, was India Red’s top run-scorer , while Ishan Kishan, Aditya Sarwate and Priyank Panchal chipped in with 39, 38 and 33 runs respectively.

For India Green, Dharmendrasinh Jadeja and Ankit Rajpoot scalped three wickets each while left-arm seamer Tanveer-Ul-Haq picked up two wickets. Mayank Markande, who had scored 76 not out off 121 balls in the first innings, got one wicket. 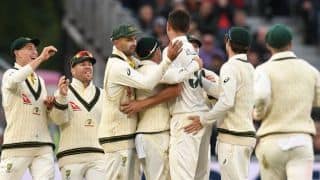