Fletcher admitted that the bowlers required improvement, but said some of the criticism was unwarranted.

Indian bowlers might have come under severe criticism for their below-par show in the recent Test series in Australia but head coach Duncan Fletcher has defended them, saying that the thrashing they got from the home side batsmen was due to inexperience of some of them.

Asked about his assessment of India’s bowling in the 0-2 series loss to Australia in four Tests, Fletcher admitted that the bowlers required improvement but said some of the criticism directed against them was unwarranted. “I agree that there is a lot of work to do with the bowlers and they must realise their responsibilities at the Test level. But I also think the Indian pacers get a lot of unwarranted flak,” Fletcher was quoted as saying by bcci.tv. “For these bowlers it’s just a matter of gaining experience of bowling in these conditions. It was something that Ishant [Sharma] showed right through the series.”

The 66-year-old, whose contract as India coach ends after the cricket World Cup to be jointly held by Australia and New Zealand from February 14, also sought to defend performance of Mohammed Shami and Umesh Yadav, saying that the pace duo did better than some of their Australian counterparts.

“You look at the highest wicket-takers in the Test series. Shami (15 wickets at 35.80) has taken more wickets than [Mitchell] Johnson (13 wickets at 35.53) at a similar average. And this was Shami’s first tour here. Umesh (11) has only one less wicket than Josh Hazlewood (12). And this is after being in and out of the Test and ODI teams on a regular basis, which is not good for the confidence and rhythm of any bowler,” said the Zimbabwean.

He was pleased with the performance of the Indian batsmen but said they need to work on their shot selection. “It’s good to see almost all the batsmen among runs, especially that outstanding performance by Virat. He has also done well in Australia in ODIs and I hope that continues. He is such a positive individual and has a positive influence on the side. The other batsmen, at times, have shown good form.

“The one area they need to work on is their risk assessment. In the Test matches, at times, I felt like they got themselves out. Now they need to understand what shots are on in certain situations. That will be one important aspect for us to work on in the tri-series,” said Fletcher who took charge of the Indian team in April 2011.

Talking about the upcoming ICC Cricket World Cup 2015, Fletcher said that the Indian players know how to win big tournaments and they can defend the title they won in 2011 as they have been doing well in all conditions in the limited over formats of late. “This will be my third World Cup as a coach and I am very excited, especially given the side we have. I think we have a good chance to win after the way the team has been building over the last three-four years,” he said.

“What makes this team special is that over the last few years they have faced all kinds of situations in the limited overs cricket and have shown they are capable of coming out successfully from all of them. That’s why I say that we have a good chance to win this World Cup,” he said.

Fletcher also felt that the team will have the advantage in the World Cup, having acclimatised to similar playing conditions in Australia. “It is going to be a huge advantage. Also, playing the tri-series just before the World Cup is a great idea for us in getting used to how the white ball behaves here. This series will be a good chance to have a look at them for the advance stages of the World Cup,” he said.

“Since most of these boys have played in the Test series, they know the conditions well and how each player approaches his game in these conditions. When too many new players come in, it takes time for everyone to get used to their little idiosyncrasies and how they cope in certain situations. You are doing away with the learning curve and that gives you a chance to hit the ground running.”

Asked about using the tri-series as a preparation ground for World Cup, Fletcher advocated caution in this approach while also revealing that the team will experiment a bit. “That’s one area where we will have to be careful, in maintaining balance between trying to win the tri-series while also using it to try out some things we might do in World Cup, because by the time we get there, we want to be settled. We have to be careful in doing that — trying to sort some stuff out, be it a technical issue or a selection issue or getting the players to be comfortable with their respective roles going into the World Cup,” he said.

He said pacers Dhawal Kulkarni and Mohit Sharma, who are not part of World Cup squad, will be fielded in some tri-series matches to give rest to other main bowlers. “The two bowlers in tri-series who are not part of World Cup — Dhawal Kulkarni and Mohit Sharma — will be used to give those who played Tests a bit of rest. This is where we’ve got to be smart. We still want those main bowlers to learn and be ready to bowl in one-day conditions with white ball. At the same time we don’t want to over-bowl before the World Cup.”

Fletcher expressed confidence that the bowlers will come up with a good show in the World Cup despite their below-par display in the Test series against Australia. “As for World Cup, we have to remember that when we won Champions Trophy, the bowlers defended a very, very low totals and they must be given credit for that. I feel that they are much more confident when they bowl in the one-day game because they have played more amount of limited overs cricket with the ODIs, IPL and T20Is. They have much more experience in the shorter formats as compared to Test cricket,” he said.

He also lauded captain MS Dhoni, who has just retired from Test cricket, for his “calm” leadership. “One-day cricket is all about handling extreme pressure when side is down. Our excellent record when chasing totals shows that. The team has been led by MS Dhoni’s attitude. His calmness does rub off on the team as a whole. Most other sides can’t do it because under such pressure, you lose your cool, the decision-making becomes cluttered and you lose your way.

Fletcher said lack of options regarding the quality all-rounder in middle-order was one area that makes nervous. “What we need in these conditions is a good batting all-rounder who bowls seam. That will add depth in our batting and give us that extra bowler. That is the real reason why we have Stuart Binny in the squad. We’ll have to have a close look at him here because batting deep is going to be very, very important in this World Cup,” he said. 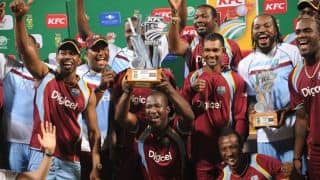