Captain Dwayne Bravo says the West Indies will attempt a clean sweep when they play Zimbabwe in the third and final One-Day International at the National stadium Tuesday. 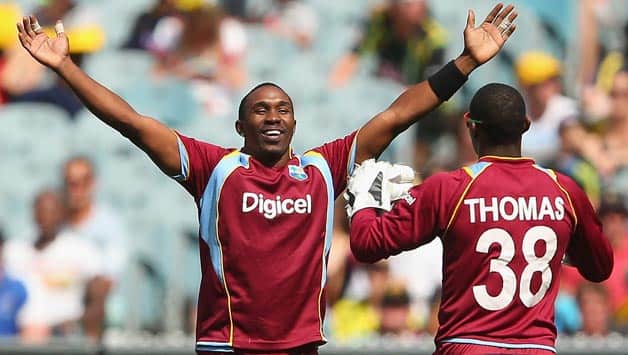 Captain Dwayne Bravo says the West Indies will attempt a clean sweep when they play Zimbabwe in the third and final One-Day International at the National stadium Tuesday.

The West Indies have already won the series after coasting to a seven-wicket win over Zimbabwe in the second ODI Sunday to lead 2-0.

However captain Bravo says his charges intend to keep their feet on the gas and press for an unbeaten record in the series.

“We are not going to look back and say we win two nil, we win the series and take our foot off the gas. It’s not going to happen,” Bravo told reporters during a post-match news conference.

“We are going to come out Tuesday again and whatever we do, bat first or bowl first, try and put on another great display good all round performance a great team performance and try to finish the series three nil and that’s our game and we are looking to move forward.”

Ramnaresh Sarwan scored an unbeaten 120 to carry the West Indies to their target of 274 off 49 overs after the visitors made 273 for eight.

Medium pacer Bravo was the main destroyer of Zimbabwe’s innings collecting career-best figures of six for 43 from his 10 overs, to claim Man-of-the-Match honours.

“I am not back as yet. I still have a lot of work to do. Getting six wickets…. Yes it’s a great feeling. Great achievement personally but I would not say that I am back to the best that I was before,” Bravo said.

“The six wickets will help. Definitely will get my confidence back and I could always push forward and hopefully things can continue to get better and hopefully no injuries to hamper me, that’s my main concern.”

The third ODI between West Indies and Zimbabwe will take place Tuesday.

Johnson Charles moves up in ICC ODI Rankings for batsmen