Bridgetown (Barbados): Dashing former West Indies batsman Dwayne Smith will retire from domestic One-Day cricket for Barbados Pride, ahead of January’s Regional Super50. The 33-year-old said he was no longer part of the selectors’ plans and though he was hurt by not being able to finish his career at home in 2016’s 50-Over tournament, he had little choice but to call it quits, reports CMC. Barbados and Antigua are the hosts for the 2017 Super50 which runs from January 24 to February 18. “I basically have to make one big decision now for sure and that’s I’m going to send in my resignation from 50-overs cricket for Barbados Pride, banking on the back of not being given the opportunity to finish my career at home,” Smith told Line and Length Network on Tuesday.

“I really wanted to, I’ve asked the selectors, I’ve spoken to them but obviously they had their different plans and I guess I didn’t fit in. It was touching, it hurt me a lot because I really wanted – even if it was one game I played in the 50-overs competition coming up – I would have been happy,” he added. Smith has garnered 3,500 runs from 183 List A games at an average of 23 but had a disappointing outing in 2016’s Super50 when he managed just 116 runs from eight innings at an average of 14.

The right-handed Smith said he had been encouraged to end his Pride career at home and was hurt he could not bow out in this way. “A lot of the youngsters had asked me to finish in Barbados because I had told them I was not going to continue but they really, really wanted [me to finish at home],” said Smith, who quit first class cricket two years ago.

“I really wanted to finish at home seeing that I knew the tournament was going to play at home but life goes on, I can’t really dwell on that. For the last two years or so, the team they have put together have been gelling well together and I love to see that camaraderie.” Smith’s international career has been over for some time. He has not played a One-Day International (ODI) or T20 International for the West Indies in two years, and said he had accepted this reality even though nothing formal had been communicated. He made 1,560 runs in 105 ODIs and 582 runs in 33 T20s. 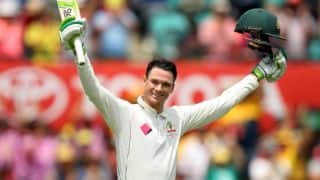