English cricket's finances received a major boost on Friday with a new TV contract netting the governing body the ECB over a billion pounds.

London: English cricket’s finances received a major boost on Friday with a new TV contract netting the governing body the England and Wales Cricket Board (ECB) over a billion pounds. Sky Sports saw off strong competition from BT Sports for the most expensive part of the contract retaining its position as the main rights holder for the 2020-2024 period. However, there was some comfort for those who have gone years without watching live cricket on free to air television the 2005 Ashes was the last domestic cricket to be aired free on Channel Four. The BBC who last showed live cricket in 1999 but recently showed highlights of the Champions Trophy tournament won live broadcast rights from 2020 for 21 matches, including men’s and women’s internationals and the England and Wales Cricket Board’s new Twenty20 competition. County Championship 2017: Essex, Derbyshire script wins

The decision on who won the rights was taken by a five man panel including ECB chief executive Tom Harrison and chairman Colin Graves. Harrison was keen to stress the breadth of coverage the deal will bring could provoke extra interest in the sport. There has been a fall in participation in recent years despite huge financial investment at all levels. “This is a great result for cricket. ECB has secured the reach, revenue and relevance the game deserves, to help it to grow,” said Harrison. Root claims he is not a natural leader ahead of Test captaincy debut against SA

“Together, these new deals will deliver the partnership, distribution and investment that will fuel the future of our game, driving recreational, professional and international cricket for years to come. Sky Sports have offered a true partnership more than a broadcast deal with their shared vision for cricket. Here, they further increase their live commitment and have added bold ideas to drive engagement and to help to get a bat and ball in more hands.” England vs South Africa: Faf du Plessis likely to return for Lord’s Test

“BBC are valuable long-term partners, bringing cricket to listeners, viewers and a new digital audience. We are delighted they will go to another level with live coverage of international and domestic T20 men’s and women’s alongside prime-time highlights shows and a commitment to taking the game to even wider audiences.” 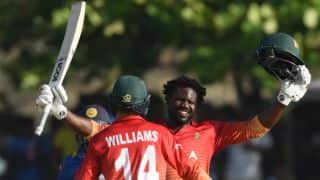