Ed Cowan played his last Test in 2013 against England.

Melbourne: Uncontracted Australian Test batsman Ed Cowan on Sunday admitted that a national recall is unlikely, but his cricket career still remains alive. “I still have a deep desire to play Test cricket with full knowledge that it’s unlikely to happen again, but you can hold on to the dream, I guess,” Cowan was quoted as saying by Cricket Australia (CA). Ed Cowan: Day-night Tests will be successful

“There’s certainly a chance I’ll play for New South Wales again. At the moment there hasn’t really been any discussion with them. I just wanted to get my life sorted and move back to Sydney and get everything in place,” he said. Richie Benaud’s family declines Tony Abbot’s offer of a state funeral

Having given priority to the sport over other parts of his life for 15 years, Cowan simply believes the time is right for him to move forward. He said the tragic passing away of Phillip Hughes in November played a significant role in giving him a new perspective on the game and its role in his life. Hughes died after being hit by a Sean Abbott bouncer in a domestic match on November 25 last year. Richie Benaud, Phillip Hughes to be honoured by Cricket Association of Nepal

“This season was probably the start of me letting go of cricket as the be-all and end-all in life. And we had some tragic circumstances around Phillip that gave a lot of us some perspective. All of a sudden you realise it’s a game that needs to be enjoyed, and there are other things in life that are more important,” he added. VIDEO: Ian Chappell, John Howard pay tribute to Richie Benaud

The 32-year-old Cowan believes selectors have their eye on Joe Burns to replace Chris Rogers when the left-hander retires from the Test side. “I think the selectors probably have their eye on Joe Burns to open the batting but I also feel as though I’ve still got a lot to offer the Australian Test team. The reason I would play one more season of cricket is I don’t want to turn around in a year and say what if?” he said.  Richie Benaud: A life in photographs 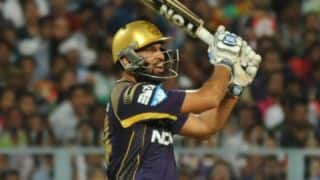