A round-up of the Elite Group C matches in round seven of the 2018-19 Vijay Hazare Trophy.

A round-up of the Elite Group C matches in round seven of the 2018-19 Vijay Hazare Trophy.

Left-arm spinner Shahbaz Nadeem once again starred for Jharkhand and his 5 for 17 against Jammu and Kashmir helped his team to maintain the top spot with 18 points in four matches with a 73-run win over J and K at Chennai on Thursday in Round 7 of the 2018-19 Vijay Hazare Trophy.

Nadee, who had registered the best List A figures in history a week back, ran through the J and K batting unit and even effected a run out.

After being put into bat, Jharkhand were in all sorts of trouble finding themselves at 126 for seven with left-arm spinner Waseem Raza picking up three wickets. Only Virat Singh put up some resistance with 33 off 74 at the top, before U-19 star Ankul Roy stamped his authority with a 72-ball 96. Along with Nadeem, Roy combined for a match-defining stand of 77 runs for the seventh wicket. Nadeem added just 12 in the partnership as Jharkhand finished with a respectable 221 for 8.

In reply, Nadeem struck early removing opener Irfan Pathan for (18) and No.3 batsman Shubham Khajuria (18) as J and K lost their next seven wickets for just 39 more runs. Mohammed Mudhasir s late order assault of 53 off 28 then helped J and K to 148, proved little in the outcome of the match

At Murugappa, Haryana notched up their third win in five matches to move to second with a 147-run thumping of Rajasthan, who slumped to the bottom of the table.

After being put in to bat, Haryana lost openers Harshal Patel for 0 and Shubham Rohilla (18) to Tanvir ul Haq before Chaitanya Bishnoi (43) put on Nitin Saina (21) steadied the innings. Handy contributions from the middle-order Himanshu Rana (44), Jayant Yadav (26), RAhul Tewatia (26), that revolved around Pramod Chandila s 88 helped Haryana to an imposing 304.

In reply, Rajasthan s innings never got going, losing their top five for just 67 runs with former Indian international Mohit Sharma and Harshal scything through the top-order taking four wickets between them. Aditya Garhwal (27) and Tajinder Singh (28) hung around for a bit. Abhimanyu Lamba then top-scored with 46 off 67 but could prevent Rajasthan getting bowled out for 157

For Assam, opener Riyan Parag, another U-19 star, made 45 with middle-order batsmen Wasiqur Rahman adding 43 and experinced Gokul Sharma making 42. 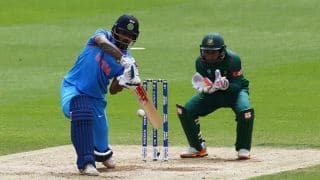 Pakistan vs Australia: Mohammad Amir dropped for Tests against Australia