England Ashes heroes draw caricatures of each other for charity

England’s Ashes heroes of 2005 and 2015 teamed up to draw caricatures of each other for a fundraising event for cricket’s three leading charities— Lord’s Taverners, Chance to Shine and the PCA Benevolent Fund—that aim to improve lives through cricket. The portraits will be available to buy on eBay, with the auction open until August 23, while the three charities urging the public attending the third day of the final Ashes 2015 Test at the Oval to wear something blue to celebrate the Cricket United Day. With a 3-1 win in the ongoing tournament, the English cricket team have already reclaimed the Urn, which they had lost in 2013-14 following a whitewash Down Under.

According to a report from Mirror.co.uk, the likes of Andrew Strauss, James Anderson and Michael Vaughan tried their hand at pictures of their team-mates. Joe Root, who studied art at A-Level perfectly sketched a sozzled Andrew Flintoff asking to about renting a pedalo, in-reference to his infamous 2005 Ashes celebrations. Last year Flintoff had revealed about that incident in the Caribbean, saying that it was an attempt to get out to sea and find the boat on which he believed Ian Botham was enjoying a late-night drink.

In return, the England legend complimented the 24-year-old Root as a baby crawling towards the Ashes urn. Meanwhile, English skipper Alastair Cook said,” It’s a bit of fun and the lads enjoyed drawing the 2005 guys. We hope the portraits will raise much-needed funds for three fantastic charities, the Lord’s Taverners, Chance to Shine and the PCA Benevolent Fund, and help improve lives through cricket.” READ: Alastair Cook admits to considering resignation as Test captain before Ashes 2015

“It’s safe to say that the majority of us are not budding artists, but we’d urge all cricket fans to support the Cricket United appeal either through bidding for the drawings on eBay or by helping to turn the Kia Oval blue on August 22,” Cook added. 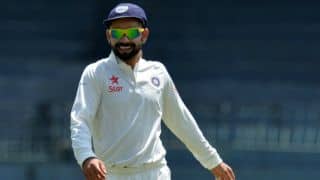 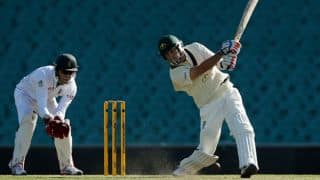 Bangladesh vs Australia 2015: Glenn Maxwell may get a call