Jonny Bairstow led the way for England with a match-winning unbeaten knock of 83 off 60 balls.

England clinched a hard-fought three-wicket win in the final game of the five-match One-Day International (ODI) series against New Zealand at Chester-le-Street in Durham on Saturday. Jonny Bairstow led the way with a match-winning knock of 83 off 60 balls, as England won the series 3-2.

The England innings faced an hour-long delay due to a prolonged spell of rain, which threatened to call the game off. After the retreat of the showers and the inspection of the pitch by the officials, the target was reset to 192 from 26 overs. Updates: England vs New Zealand, 5th ODI at Chester-le-Street

The New Zealand bowling lineup, which performed badly throughout the tournament, were in a different avatar during the England innings, with almost everything going their way for the most part. The opening stand between Jason Roy and Alex Hales, who taken their side off to successful starts for most part of the tournament, was worth only eight runs as Hales was caught by Williamson off the bowling of Mitchell Santner, who was introduced by skipper Brendon McCullum early in the England innings in what turned out to be a tactful move. Scorecard: England vs New Zealand, 5th ODI at Chester-le-Street

Though the target was shortened for the hosts, the Kiwi bowlers, especially Santner, ensured that they made up for their shortcomings previously in the series by making life a living hell for the opposition batsmen for the next few overs. Joe Root was stumped off the bowling of Santner for a score of four. The biggest shock however, was skipper Eoin Morgan getting dismissed for a golden duck, ending what has been a brilliant series for the England captain in a rather damp manner. Santner had put New Zealand in firm control of the situation by this point. READ: Eoin Morgan becomes first England ODI captain with four or more consecutive 50-plus scores

Wickets continued to tumble for England, with Ben Stokes and Roy departing for scores of 17 and 12 respectively, as England were reeling at a score of 45 for five. That was when Bairstow, who earned a sudden call to the England squad for the fifth one-dayer in order to replace the injured Jos Buttler, formed a crucial 80-run partnership with Sam Billings for the sixth wicket. The pair did not waste much time in settling down at the crease, and began to attack the opposition bowlers freely. Grant Elliott in particular was in for some beating, conceding 16 runs off one of his overs. READ: Graeme Swann urges England to keep up ODI ‘courage’

Billings was finally dismissed nine runs short of a half-century, with Ross Taylor taking a fine catch at short mid-wicket off the bowling of Matt Henry. David Willey was next to depart, as Bairstow continued to get quick runs for England, bringing up his fifty in 45 deliveries.
The wicketkeeper batsman was given a major breather in the 22nd over of the innings, when he top-edged a rising Henry delivery towards third-man, where Santner made a mess of the catch and spilled it, effectively dropping the series trophy as well.

It was a breeze for Bairstow thereafter as he plundered the bowlers with ease. With a supportive Adil Rashid on the other end, Bairstow helped England score 39 runs off the next three overs as England crossed the finish line with an over to spare.

Earlier in the match, New Zealand finished on 283 for the loss of nine wickets, with Martin Guptill and Kane Williamson leading the way among the batsmen with knocks of 67 and 50 respectively. Skipper Brendon McCullum was dismissed after hitting a six as the Black Caps lost their first wicket with just seven runs on board.

Guptill and Williamson however, brought their side back on track with a 94-run second-wicket stand. Guptill further added 49 runs for the third wicket with Taylor (47 off 63 balls), as New Zealand seemed to be heading for another total around the range of 300. The England bowlers however, began to fightback around the second batting powerplay, with the visitors collapsing from 210 for 4 to 219 for 7. New Zealand eventually finished on 283, with 22 runs coming off the last over courtesy some powerful hitting by Ben Wheeler.

Man of the Series: Kane Williamson 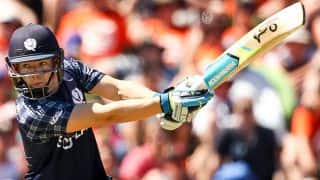 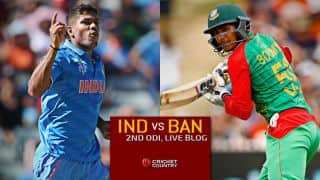