England have all their wickets intact.

England ended Day 2 of the second Test against West Indies at 74/0 at Grenada. England had earlier bowled West Indies out for 299, after Marlon Samuels’ seventh Test ton helped the hosts get out of a spot of bother initially, which was followed by a 52-run stand for the 10th wicket by Devendra Bishoo and Shannon Gabriel. Full Updates West Indies vs England, 2nd Test, Day 1

The day started with Samuels scoring his century after he was unbeaten on 94 overnight. Due to rains, lunch had to be taken early after which Samuels reached the three figure mark with a boundary. He was supported well by his skipper Denesh Ramdin, who played his part in the 94-run stand for the fifth wicket. Jason Holder hit some lusty blows on his way to 28, but he was soon dismissed by Stuart Broad. Full SCORECARD: West Indies vs England

With the team on the brink of getting bowled out, Bishoo and Gabriel came together and stitched an excellent partnership, which made sure that West Indies got close to 300. They played some excellent shots and ensured that they did not throw their wickets away like a few other batsmen did. The final wicket fell at 299 with Bishoo being dismissed for a well made 30. Gabriel remained unbeaten on 20. Marlon Samuels slams 7th Test century in West Indies vs England 2nd Test at Grenada

Stuart Broad was the pick of the bowlers for England as he finished with figures of four for 61. James Anderson and Chris Jorda chipped in with a couple of wickets apiece. Ben Stokes ended the innings with one wicket to his name. Devendra Bishoo, Shannon Gabriel put on 52 for 10th wicket for West Indies vs England, Day 2 at Grenada

England made a steady start to their innings. Jonathan Cook and skipper Alastair Cook were determined not to lose any wickets at the end of the day and they managed to achieve just that. Cook on his way to 37 also became the second highest run scorer for England in Tests, surpassing Alec Stewart.

England have many talented players to follow and their priority on Day 3 will be to wipe out the deficit as soon as they can and set a platform from where they can take a huge lead to put West Indies under some pressure. With the opening batsmen well set, they will look to build a mammoth opening partnership, something that will be a huge boost to the whole team. 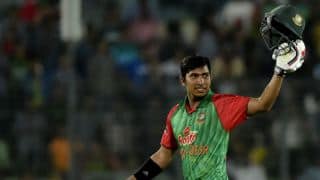 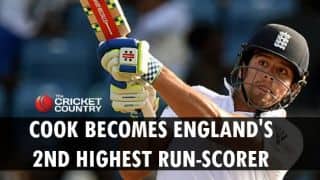