Sam Robson and Cook guided England to safety at the end of the day's play.

England finished in command over the second Test match after Liam Plunkett‘s five-wicket haul and Stuart Broad‘s hat-trick helped the hosts bundle Sri Lanka out for 257. English openers Sam Robson and skipper Alastair Cook finished the day on a positive note, taking the score to 36 without the loss of a wicket. Sri Lankans will have their task cut out on day two and their frontline pacers need to be on target to wrest initiative back in Headingley. England’ s pace battery bowled superbly throughout the day, as they didn’t let the Sri Lankans breathe easy even for a minute.

After winning the toss and electing to bowl first on a lively Headlingly track, earlier in the day, Anderson and Liam Plumkett struck to finish with first session honours. Anderson in particular was on target and had opener Kaushal Silva all at sea before finding a faint edge of his bat and Matt Prior took a safe catch behind the wicket. Earlier in the day, Alastair Cook won the toss and decided to b0wl first in overcast conditions in Headingley. The ball was moving around quite a bit and unlike the first Test at Lord’s, the batsmen found it hard to get runs.

After losing both the openers in the morning session, Mahela Jayawardene and Kumar Sangakkara resumed proceedings for Sri Lanka in the post-lunch session. Moeen Ali started the session to effect a change of ends for the pacers. But the crucial partnership between the two veterans didn’t last long.

Liam Plunkett was bowling with some appreciable bounce and velocity. First he got the ever-so-elusive from Sangakkara, but only to be dropped in the most hilarious and shocking fashion by Matt Prior. Having taken the edge, the ball was coming at chest height towards Prior, who sort of looked away from the ball before pouching it. Plunkett seemed frustated. But he came back.

In his next over, he again got the edge — this time off Jayawardene’s bat, and this time Chris Jordan at second slip held on to a rather contrasting chance. It was travelling and dying on him, but he held out his right hand, and safely held on to it. Lahiru Thirimanne then replaced Jayawardene in the centre. But he lasted just one delivery. Plunkett greeted him with a snorter first-up, and Thirimanne was in no position as he lobbed an easy catch for Joe Root at short-leg.

Suddenly, Sri Lanka had lost all momentum. Captain Angelo Mathews then joined Sangakkara in the middle, and they counter attacked. They were involved in a quickfire 50-plus partnership but it couldn’t go on. Mathews’s counterattacking tactics backfired. Up against James Anderson, he again poked at a delivery in that corridor of uncertainty, and this time Gary Ballance took an easy catch at third slip. That was Ballance’s first catch in Test cricket, and Mathews became Anderson’s bunny for the second time in as many Tests. Anderson let him know that with a charged-up send-off.

Sangakkara survived again as he was again dropped. This time by Moeen Ali off Chris Jordan’s bowling at backward point. A difficult chance, but should have held on to it. Sri Lanka had lost half their side against some inspired swing bowling from Plunkett and Anderson, and were precariously placed at 182 for the loss of five wickets at the end of the second session. But the carnage started in the last session of the day.Sangakkara and Chandimal were stringing a fine partnership before the former finally ran out of luck. He survived on multiple occasions throughout the day, but finally his quota ran out. A flashy drive outside off, got the edge, and Ian Bell took a stunner at gully. Of all the easy chances they let go against Sanga on Day One, that was a fitting end to that innings. Broad the wicket-taker.

And then hell broke loose as Sri Lanka went nine down in the matter of the next two overs. Dhammika Prasad was the new man in, who had replaced Nuwan Kulasekara in the team. And he doesn’t last long. Two balls to be precise. Plunkett the wicket-taker again. It was a snorter from Plunkett, and Prasad was squared up, as he handed an easy catch to Prior. And then another wicket. Broad started his next over by sending the set Chandimal back to the pavillion. He was playing well. But then handed a catch to Captain Cook at first slip.

Then came in Shaminda Eranga. And he justified his batting position. Out first ball. Another edge, and Prior held on to the dying edge. Broad was on a hat-trick. But the No. 11, Nuwan Pradeep survived. But wait! Stuart Broad had actually got the hat-trick. Because Sangakkara’s wicket had come off the last ball of his previous over. Nobody realised this. Yes, Broad became the fourth bowler in history to take two hat-tricks in Test cricket, and even he didn’t realise it. And then, fittingly enough, Plunkett dismissed Pradeep soon enough to get his fifth wicket of the innings, and register his first five-for in Test cricket. 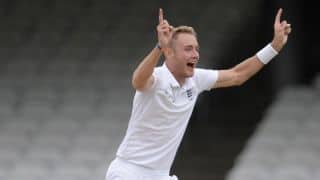 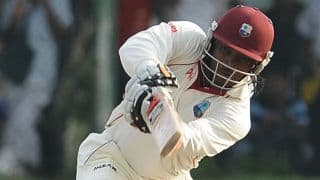