England pacer Tim Bresnan will miss the Test series against Sri Lanka after scans revealed that he tore a calf muscle last week. 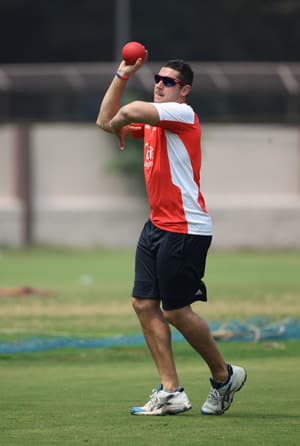 England pacer Tim Bresnan will miss the Test series against Sri Lanka after scans revealed that he tore a calf muscle last week.

“England’s medical staff have confirmed this is a recurrence of an injury Bresnan first sustained earlier in the year during the ODI series against Australia. A rehabilitation and recovery programme will be established in the coming days following further medical assessment,” the Daily Telegraph reported quoting an England and Wales Cricket Board statement.

The pace attack for the first Test starting May 26 in Cardiff now seems likely to rest with James Anderson, Stuart Broad and either Chris Tremlett or Steven Finn.

The 26-year-old played two Ashes Tests during the winter but his 11 wickets were central to England winning both.

Bresnan was struggling with the problem in the last few World Cup games in Sri Lanka. He was back to county action soon after the gentle workout but got injured after bowling just 32 overs in the championship and seven in the CB40.

I focussed on cricket & changed people's perceptions about me: Kohli