In March 2016, we saw the unprecedented. Before this, no team had reached the 400-run mark. Forget winning the match, reaching close to such colossal total and that too while chasing was considered impossible. And after Australia posted 434, South Africa pulled off the unlikely and chased it down with 1 ball remaining. However, England surpassed all in this department, as they scored 444 in 50 overs, highest total in One-Day International (ODI). To add to the fire, it took a decade for the team to exceed Sri Lanka’s total of 443 against Netherlands. Yes, it took over 10 long years for a team to achieve this milestone. FULL CRICKET SCORECARD: Pakistan vs England 2016, 3rd ODI at Trent Bridge

This is England’s second 400-plus total in this format. The first one came against New Zealand in June 2015, which they won by a huge margin of 210 runs. It was the staggering duo of Joe Root and Jos Buttler who fired on all cylinders and placed England in the list of 400-run mark.

However, this time against Pakistan, Alex Hales emulated what Root and Buttler did last year, but he took it to the next level. He scored 171 off 122, including 22 boundaries and four sixes. In the process, he registered highest individual total for England. In other news, Buttler blasted fastest half-century for England, taking him only 22 ball to do so. FULL CRICKET UPDATES: Pakistan vs England 2016, 3rd ODI at Trent Bridge

England cricket has been in an upward surge ever since their debacle in the ICC Cricket World 2015. They, as a matter of fact, cover all bases: batting, bowling and fielding. If they continue to do so, we might see them clinching their maiden World Cup title, in 2019. 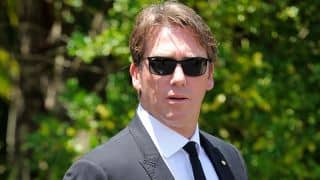