Ollie Pope will link up with the Lions for a tour of the UAE where they will face Pakistan A.

England have released Ollie Pope from their squad for the ongoing Test series against Sri Lanka. Pope will link up with the Lions for a tour of the UAE where they will face Pakistan A.

Surrey batsman Pope made his Test debut earlier this year during the home series against India, making 54 runs in three innings. England want the 20-year-old have more game time rather than spend time on the bench after Ben Foakes’ memorable debut.

Foakes came into the Test XI as the replacement for injured Jonny Bairstow and immediately left an impact with a century on debut. With Bairstow close to attaining full fitness and the presence of Joe Denly, it’s a difficult proposition for Pope to claim a place in the playing XI.

“It is important that Ollie is playing and the selection panel felt that to aid his development the best course of action is for to him to go and play for the Lions in a competitive series against Pakistan A,” England head coach Trevor Bayliss said on Sunday.

He continued, “Ollie needs some game time before the West Indies Test tour early next year and will get more out of playing competitively for the Lions rather than spending the next three weeks in Sri Lanka on the sidelines. He will get the opportunity of playing up to eight matches across all formats in the UAE.” 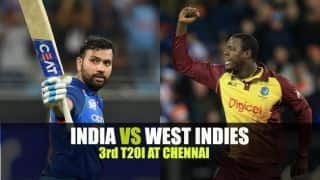