England women's wicketkeeper Sarah Taylor is holding talks about the prospect of playing for Sussex's men's 2nd XI in the upcoming domestic season, The Guardian newspaper said on Monday. 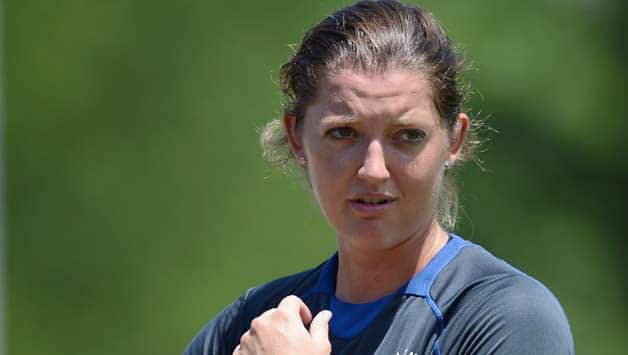 England women’s wicketkeeper Sarah Taylor is holding talks about the prospect of playing for Sussex’s men’s 2nd XI in the upcoming domestic season, The Guardian newspaper said on Monday.

Taylor, one of the leading players in international women’s cricket, is set to travel to India later this week as a member of an England squad who will be defending the 50-over World Cup title they won in Australia.

“Mark is looking at me getting some games with the second XI at Sussex and that will be just phenomenal cricket,” Taylor said in an interview published on The Guardian‘s website.

“The plan is also for me to play some early season games for the MCC (Marylebone Cricket Club) boys. Mark is trying to get me a lot of men’s cricket which can only help my game.

“It’s just a case of here could be an opportunity for me. Someone at Sussex approached Mark and asked if there was anyone who could keep (wicket) and Laney, being Laney, was quick to back me.

“It’s daunting but it’s brilliant that he backs me to do it in men’s cricket. The MCC also approached him about me playing for them. Part of me knows it would be phenomenal. But there’s part of me doubting myself.

“I’ve just got to start believing in myself a little bit more. But I would love to do it. It would be such a challenge.”

Former England seamer Mike Selvey, now a cricket correspondent at The Guardian, has suggested Taylor is the one woman whose skills as both a wicketkeeper and batsman could conceivably allow her to play first-class cricket.

Many women who have been dominant figures in gender-segregated sports have been attracted to the challenge of competing against men, whose generally greater physical strength is reckoned to give them a huge advantage, after sweeping all before them in women-only events.

But US golfer Michelle Wie’s forays into male tournaments have been largely unsuccessful, with the 23-year-old making only one cut in a men’s event.

Sports that have long been gender neutral, such as equestrianism, have seen women frequently defeat men, with female riders led by champion Charlotte Dujardin of Great Britain taking all three podium places in the individual dressage at last year’s London Olympic Games.

But in sports usually separated by gender,there have been concerns that female participation in men’s events would damage the profile of all-women competitions, which generally struggle for media coverage and sponsorship in comparison to their male equivalents.

Michael Hussey: Disappointed not to be playing in ODI series against Sri Lanka, West Indies