Joe Root and Moeen Ali took the three remaining wickets after tea as Australia were bundled out for 242.

Mitchell Johnson scored an entertaining 77, but the result was a forgone conclusion by then. England beat Australia by a massive 169-run margin in the first Ashes 2015 Test at Cardiff. Joe Root and Moeen Ali took the three remaining wickets after tea as Australia were bundled out for 242. Live Scorecard: England (ENG) vs Australia (AUS) Ashes 2015 1st Test at Cardiff, Day 3

Johnson brought out some huge hits in his 94-ball 77, smashing nine fours and two sixes but it was far too little far too late. He and Mitchell Starc put on 72 runs in quick time before Starc edged Root to Alastair Cook at gully, who juggled the catch and fell over only to see Adam Lyth complete a fine catch at slip. Johnson was the next man to be dismissed, stepping out and looking to go big against Root but only edged to Lyth at slip. Josh Hazlewood hit a couple of boundaries but was the last man out, holing out to Root off the bowling of Moeen, who once again ended with three wickets. Live Blog: England (ENG) vs Australia (AUS) Ashes 2015 1st Test at Cardiff, Day 4

England’s pacers struck repeatedly after lunch to leave  on the verge of a massive defeat on Saturday. Stuart Broad started the slide by getting Steven Smith out caught at slip by Ian Bell just seven balls after the break. Broad then took the massive wicket of Michael Clarke, virtually sealing the fate of the game. England are three wickets away from going 1-0 up in the series. READ: Ashes 2015, Cardiff: Tale of Two Tails

It was a case of Australian batsmen not being able to cope with some sensible English bowling, with Broad being the star of the show. As he has done so often, Broad bowled a decisive spell on either side of lunch, first getting Chris Rogers to edge to Ian Bell at slip and then getting rid of Smith. He was not done though; Michael Clarke was pushed on the back foot and ended up driving one in the air to point without moving his feet. READ: The Moeen Ali conundrum

Once Australia’s top four were back in the hut, it was always going to be a battle of survival. Adam Voges nibbled at a straightforward ball from Mark Wood and edged behind to Jos Buttler. Brad Haddin played as he usually does, looking to dominate Moeen Ali only to succumb to a wonderful catch by skipper Alastair Cook. READ: Australia paying price for being slack against England

Shane Watson was the last man to be dismissed in the session. Unsurprisingly, he was out LBW to a straight ball from Wood. As usual, he opted for a DRS review, and as usual he was adjudged out. Mitchell Johnson and Mitchell Starc were the two unbeaten batsmen at tea, with the former batting on 26. READ: Australia’s ‘Dad’s Army’ leader Chris Rogers makes intention clear

Earlier, David Warner was dismissed at the stroke of lunch for 52. Steven Smith was in at No. 3 and ensured that runs kept coming at a decent clip.Warner looked in much discomfort in the first hour of play. He was on 17 off 41 balls at one stage before exploding against Moeen Ali, hitting him for a back-to-back six and four. That over from proved Moeen proved to be the spark that Warner and Australia needed. They managed to find a boundary off virtually every over after that. However, Moeen Ali — who had gone for 22 off his first two overs — managed to breach Warner’s defence, getting him out LBW for 52 at the stroke of lunch to ensure England ended the session on top. READ: Australia must learn to thrive on flat decks

Half-centuries from Joe Root and Ian Bell and a late cameo from Mark Wood ensured that England ended Day Three in control. England managed to take a 411-run lead after being bowled out for 289. Root and Bell were dismissed for identical scores of 60 off 89 balls, while Wood hit some lusty blows to remain unbeaten on 32 off only 18 balls. READ: England wasting Joe Root at No. 5 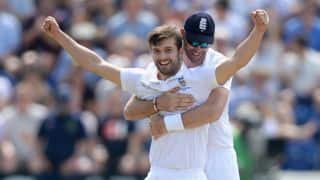 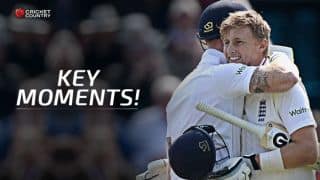