England registered a T20 series victory over Australia as Jos Buttler continued his fine form to inspire his team to a six-wicket win at the Rose Bowl, Southampton, on Sunday (September 6).

Buttler remained unbeaten on 77 as England reached the target of 158 with seven balls remaining.

After Jonny Bairstow’s early dismissal, Buttler batted sensibly in a stand of 87 with Dawid Malan (42).

With 18 needed off the final two overs, Moeen Ali hit 10 from two balls before Buttler sealed the deal with a maximum.

“At the top of the order is clearly the best place to bat in T20s,” said Buttler who was named the Player of the Match.

“The wicket got easier as well as the match went on. We got through the first two-three overs and got a partnership that set us up for the rest of the chase. Credit to Moeen (Ali), he came out and took on the spin and when he got those two boundaries, he took the pressure off. I was very keen to stay till the end after what happened to Australia in the last game. It wasn’t going to be easy for the new man coming in and that’s why I wanted to keep the responsibility of finishing off the game.”

Pacer Chris Jordan was the pick of the bowlers for the hosts, returning figures of 2/40 but it was a team effort as Jofra Archer (1/31), Mark Wood (1/25) and Adil Rashid (1/25) bowled superbly to keep the pressure on the Aussies.

For the visitors, skipper Aaron Finch top-scored with 40 off 33. Marcus Stoinis also looked good for his 35 and Glenn Maxwell made 26 but all three batsmen were removed just when they looked threatening.

David Warner (0) was the first to go as he was caught behind by Jos Buttler off Archer.

Alex Cary (2), promoted up the order, was out in similar fashion to Wood. Soon Steve Smith (10) was was run out by England captain Eoin Morgan.

The Aussies were 89/5 at one stage before Stoinis, Maxwell and Ashton Agar (23) steadied the ship with Pat Cummins (13*) also chipping in. 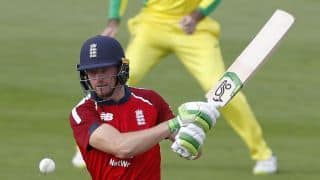 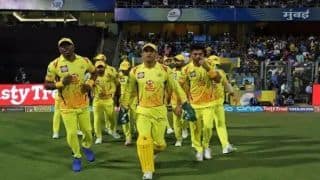