Ireland have defeated Pakistan, England and the West Indies at World Cups but a Test at Lord's is something else, according to Porterfield.

Ireland captain William Porterfield will be back on familiar territory when his side’s long march to the “pinnacle” of cricket ends with a Test at Lord’s against England on Wednesday.

The match underlines that Ireland, who have played two Tests, at home to Pakistan in 2018 and against fellow newcomers Afghanistan in India earlier this year, are now among cricket’s elite.

Ireland have defeated Pakistan, England and the West Indies at World Cups but a Test at Lord’s is something else, according to the opening batsman.

“We have got quite a few World Cups under our belt, little things like that. They have been pretty big occasions but getting to Test cricket and then having the opportunity to play here at ‘the home of cricket’ is a pretty special thing,” Porterfield said at Lord’s on Tuesday. (ALSO READ: Marcus Trescothick set to join England’s coaching team for first two Ashes Tests)

“We had a taste of it a couple of years ago with the one-dayer here…. It’s going to be a pretty special moment.”

Porterfield once worked at Lord’s when he was a member of the Marylebone Cricket Club’s Young Cricketers scheme.

“We used to have to dish out the programmes in the boxes and stuff every morning, so little bits and pieces that you have to do. It’s going to be slightly different being on this side of the fence,” said the 34-year-old.

Ireland have lost both their Tests but with England missing injured spearhead James Anderson and resting Ben Stokes and Jos Buttler ahead of the Ashes, Porterfield said an upset win for his side was possible. “It’s 11 guys against 11 guys, it’s bat against ball.  You take names, reputation, everything out of it,” he said.

Ireland, who qualified for the 2007, 2011 and 2015 World Cups, did not make it to this year’s tournament, won by hosts England just over a week ago under the captaincy of Dublin-born former Ireland batsman Eoin Morgan. “It was disappointing that we didn’t make the cut,” said Porterfield. (ALSO READ: Ben Stokes turns down New Zealander of the Year award nomination)

“From a personal point of view, I was delighted for Moggie and everything that he’s achieved with England. That’s fantastic for him and they deserve all the plaudits that they get.

“But it (the Test) provides an opportunity for us now to get out and show what we can do.”

In batsman Paul Stirling and paceman Tim Murtagh, Ireland have two players who know the conditions well as a result of playing for Lord’s-based Middlesex.

Porterfield said he did not feel offended by England’s decision to rest players or the fact the match is a four-day Test – the first played in England since 1947 – rather than the standard five.

“They (England) have just come off seven or eight weeks of tough World Cup cricket. I don’t think they’re in any way taking anything lightly.”

As for the match being a maximum of four days, Porterfield added: “It’s a good initiative. You are still making up time with 98 overs (per day).

“I think that the pace at which some Test matches are played at these days anyway, it might be a good thing for the game as well.” 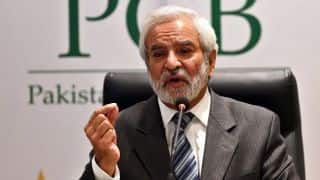