England's pace spearhead has not been passed fit for the match starting Wednesday.

Record-setting fast bowler James Anderson will not feature for England in the four-day Test against Ireland at Lord’s this week, Sky Sports reports, and faces a race against time to be fit for the Ashes opener on August 1.

Anderson is part of England’s 13-man squad for the Test starting Wednesday, but he has not been passed fit.

“Jimmy will continue to be assessed” ahead of the first Ashes Test at Edgbaston, an England & Wales Cricket Board statement said on Tuesday.

Anderson, who turns 37 on July 30, tore his right calf while playing county cricket for Lancashire earlier this month. He did not train with the England Test squad at Lord’s on Monday.

The news comes as a blow for England, who now have to pick from Stuart Broad, Chris Woakes, Sam Curran, Olly Stone and Lewis Gregory. 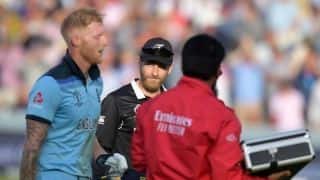